First Sentence: I first saw Hundreds Hall when I was ten years old. 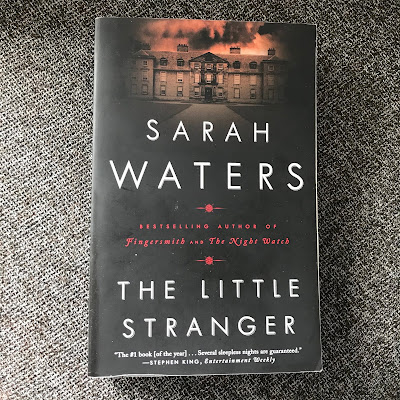 Review:
I went into The Little Stranger expecting something along the lines of The Haunting of Hill House. That is to say, great atmosphere, character work, spookiness, and maybe just a touch of ambiguity, but unmistakably horror. I've heard really good things about Sarah Waters for a while now, and because I can't resist a haunted house, I chose this book for my first selection written by her.

The setting is Hundreds Hall, a Georgian mansion in Warwickshire, post Second World War. Our hero is forty-something bachelor Doctor Faraday, a man who comes from a humble background and remembers Hundreds Hall and the Ayres family who live there from the great old days of the Edwardian era. When he's called to examine the Hundreds last live-in maid, a young girl named Betty, it ignites a relationship between him and the last of the Ayres family, Mrs. Ayres and her two children, Caroline and Roderick.

Roderick served in the Royal Air Force during the war before being injured in a crash, part of his face burned and serious damage done to his leg. He also suffered a serious bout of PTSD. Caroline nursed him through all of this. She's a solid young woman, ever practical and wandering around the grounds of the estate with her dog, Gyp. Although the maid doesn't need any significant medical attention, Faraday begins making weekly visits to treat Rod's leg with a sort of experimental electroshock therapy or something. In the process, he gets to know the family better.

This leads to their extending him an invitation to a party they host as a gesture to get to know a new family in the area, the Baker-Hydes, whose wealth is new and business-based, rather than hereditary. The party ends in disaster and this incident seems to be a catalyst for the sudden deterioration of Rod's mental health.

And that's as far as I'm going to go with my plot summary.

So like I said, I was hoping for something along the lines of The Haunting of Hill House with this book, which almost derailed how much I actually ended up enjoying it. Because this is not that. The two books have a lot of things in common:
The Little Stranger differs in a few key ways, however. First of all, Hill House is a brisk 250 pages or so, whereas The Little Stranger clocks in at over 500. Second, much of the spooky stuff in the first part of this book is very temporal, to the point where I found myself wondering if any haunting stuff would come into it at all.

I wouldn't call this more complex than Hill House, but really it's just about different things. The central characters are driving their respective novels in different directions. The Little Stranger is about creepy things happening in an old house, but it's also about class consciousness and social status. The isolation of the characters has shades of Wuthering Heights at times, despite the fact that they all have cars. I have to admit that I don't know much about why or how so many wealthy old families in England lost the ability to afford their estates, though I'm familiar with the phenomenon. It's one you can't ignore as you read this book.

Once I got to the end of The Little Stranger and sat with it for a while and stopped thinking of it as something it's not, I realized how much I liked it for what it is. It does drag a bit in a few parts, but other than that it's an excellent novel. And it is about a haunted house, whether anything supernatural happens or not. You just have to reevaluate what "haunted" means.
Posted by M.R. at 4/27/2020 12:00:00 AM