62. From Here to Eternity by James Jones

Year Published: 1951
Pages: 802
First Sentence: When he finished packing, he walked out on to the third-floor porch of the barracks brushing the dust from his hands, a very neat and deceptively slim young man in the summer khakis that were still early morning fresh.
Rating: 1/3 (don't bother) 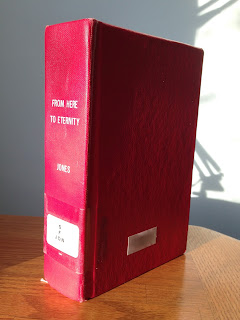 Review:
I'm doing a rare thing and actually writing my review before I've finished the book.  I'm about fifteen pages away from done, so I do indeed plan to finish it, and will finish it, and will even make a footnote about it when I do*.  But I'm almost done and I've felt the same way about the book since I was less than fifty pages in to it as I do now, and after 787 pages I guarantee that there is absolutely nothing in those last fifteen that will change my mind.

From Here to Eternity is the longest book I've ever read, but not in terms of its page count.  I can't believe that anyone else has ever read it, much less that it was a huge hit when it was published.  If not for this project, I would have given up early on.

A little less than a year before the attack on Pearl Harbor, Robert E. Lee Prewitt, a US Army bugler, is transferred into G Company, possibly because he's being sexually harassed by a superior officer, but I wasn't really clear on that.  He can't bugle anymore and his company commander wants him to box, but he doesn't want to do that, either.  The book then drags on for over six hundred pages about what happens to Prew in G Company (he receives "The Treatment"), and also the first sergeant of that company, Milt Warden, who's having an affair with the company commander's wife.  Don't ask me which of those terms should be capitalized because I don't know.  They are all at the Schofield Barracks in Hawaii, by the way, and obviously this is all before America got into WWII.  Jones actually was in Hawaii at the time when this book is set, and the thing only comes alive during the description of the attack.

The first problem is the book's relentless detail about not much.  I think I've mentioned that I wasn't a big fan of The Lord of the Rings, and one of the main reasons for that was excessive detail.  Both books are detailed this way for obvious reasons: Tolkien is creating a world with as much texture as he's able, and James Jones is describing a unique and bizarre period in the existence of the US Army, and really really really giving us a feel for the lives of these men.  Jones is an even worse writer than Tolkien, though, and I'm a person who is just not interested in this level of detail from either of them.

So yeah, that's the second problem: James Jones is not a good writer.  I can't tell if he's a bad writer because a lot of the worst things about this book seem intentional and so at least he was thinking about his writing, I guess?  But, like, this is a writer who strings adverbs.  "James Jones wrote relentlessly egregiously" is a sentence that you would find in this book.  He uses the word "grin" a lot, and he repeats things.  Another weird thing he does is leave off the apostrophes in many contracted words, like "dont," but keeps them in others, like "I'll."  This is done almost without rhyme or reason except that I think the apostrophes are retained where necessary for legibility.  Mostly.

To give Jones some credit, he did sneak in some stuff that intrigued me, although he of course flogged it beyond any interest I had.  The book is full of gay people, at least compared to most of the other List books so far (and probably to come), in a way that I didn't even really understand.  I think what happens in the book is that soldiers are stringing along gay men for cash, but I can't tell whether they're having sex with them or not, because I'm kind of dumb about the allusions that Jones is presumably making.  That's a pretty startling kettle of fish to be getting into in a book from this era. I can't really think of anything else that depicts men in the US Army circa WWII as anything other than fresh-faced and straight.

The female characters in the book are also more complex than you'd expect.  Prew is paired with a prostitute named Alma (who works under the name Lorene).  They are in love, but she goes on working at the brothel where he met her throughout their relationship.  She's working there as a way to save up for her future back on the mainland.  The book never really questions this or frowns upon her.  Warden's love interest is, as I mentioned, the company commander's wife, Karen Holmes.  After getting some STD from her husband, who of course was sleeping around, she ends up having a hysterectomy, and by the time Warden meets her she's feeling sterile and, dare I say, frigid.  Their whole relationship seems shitty to me, and they never seem happy together, so I don't get that.  But again, I don't feel as if the book really judges Karen Holmes for stepping out on her husband.

But this stuff is all just diamonds in the rough.  There's some racial and class commentary, some police and prison brutality, and on and on, but the problem is that the book goes on and on for so long that I didn't care about any of the good stuff because there'd be 75 pages of the boring stuff before more good stuff came around again, just briefly.

There's a star studded movie adaptation of this book that came out two years after the book was published, is only two hours long, and won a whole bunch of Academy Awards.  I'm going to have to recommend watching that instead of reading this book, even though I haven't seen it.

But he had always believed in fighting for the underdog against the top dog. He had learned it, not from The Home, or The School, or The Church, but from that fourth and other great moulder of social conscience, The Movies.

Karen laughed and it was like honey dripping from a spoon back into the jar between you and the sunlight.

Bad things, Prew thought, were never quite so bad, if you could force somebody you knew and liked to suffer them with you. Usually you couldn't; they were too busy suffering something themselves and trying to force you to suffer it with them. But if you could, it helped thin that sense of seeing the whole damned world move past you on the corner without knowing you were standing there. Of course, it was hard on the friends. You hated to see them suffer.