32. The Golden Bowl by Henry James

Year Published: 1904
Pages: 596
First Sentence: The Prince had always liked his London, when it had come to him; he was one of the Modern Romans who find by the Thames a more convincing image of the truth of the ancient state than any they have left by the Tiber.
Rating: 1/3 (don’t bother) 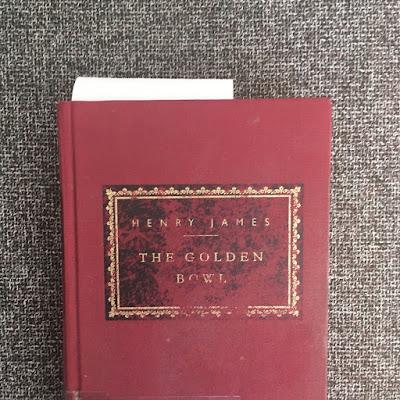 Review:
Henry James has three books on The List, and The Golden Bowl is ranked lowest but still in the top third. (Which, let's just pause for a moment and acknowledge how exciting it is that I'm two thirds of the way through my project!) The other two, The Ambassadors and The Wings of the Dove are side by side just at the edge of the Top 25. After reading The Golden Bowl, I'm a little bit unsure of how that will go for me.

In some ways I feel like I've read a lot of James prior to picking up this book, although I've actually only read two of his novels (The Bostonians and The Portrait of a Lady) and two of his novellas (The Turn of the Screw and Daisy Miller). Given who he is as a writer, however, it may only take one book to make you feel like you've read a lot of James, which is to say that he is maybe the most longwinded writer in the entire canon. His reputation precedes him when it comes to that. Also if you just pick up one of his books and flip through it you will see how longwinded he is because you will see all the paragraphs that go on for multiple pages. On the other hand, I’ve enjoyed most of what I read by him previously, with the exception of The Turn of the Screw (an extremely frustrating work, because James is so good and he just falls down on writing a ghost story).

But we're not here to talk about his other work. I think the point I'm trying to make is that James has this reputation for being impenetrable and I never really got that before, but boy I sure do now.

I did some reading about this before writing the review. Was I hallucinating when I enjoyed The Bostonians back in my early twenties? No. The fact is that as James got older, his work got more.. intense. The Bostonians was published almost twenty years before The Golden Bowl. In other words, all three books on The List are late period Henry James and I will need to strap in for some nonsense.

In this case, the nonsense consists of a very simple premise: a father and daughter's spouses start an affair with one another. American-in-London Maggie Verver marries an Italian named Amerigo who is never given a last name but who is implied to have a very good pedigree, such that he can be called a Prince. I imagined to myself that he was a member of the Borgia, although they probably aren't Italian enough. In that case, maybe a Medici. Anyway, Amerigo is basically marrying for money (but likes Maggie well enough). Maggie's father, Adam, is fabulously wealthy. The two of them are close due to the death of Maggie's mother at an early age. For various reasons, Adam Verver ends up marrying a friend of Maggie's named Charlotte Stant, not realizing that she and Amerigo had a romance before Amerigo and Maggie met. The two couples spend a lot of time together. Things go bad.

Sounds good, right? Well, it kind of is. I didn't hate this book. My reading experience was marked by a lot of frustration, though. This is a simple story that another writer could tell with maybe only a third of the pages that James takes. My previous reading made me feel that the whole point of James is to plumb every last thing to its depths, but that's unfortunately not what's happening here. In this case, the characters are so vague in their dialogue and thought that I often wasn't quite sure what was going on. Maggie and her father have three big scenes together: one before his marriage, one after she's discovered their spouses' betrayal, and the third at the end. In the second and third scenes, especially the second, I had literally no idea what transpired between the two of them.

There were two characters in the book that I loved, Fanny Assingham and her husband Bob (I doubt I need to, but I will also point out that Fanny has one of the great names in literary fiction). These two kind of disappear after a certain point, which is a shame, but they serve to provide commentary on the situation at some points. Fanny is a busybody. Here is a little bit of dialogue from a scene between her and Maggie which I hope will illustrate my point:

"Can she?" Fanny Assingham questioned.
"Can’t she?" Maggie returned.
Their eyes, for a minute, intimately met on it; after which the elder woman said: "I mean for seeing him alone."
"So do I," said the Princess.
At which Fanny, for her reasons, couldn't help smiling. "Oh, if it's for that he's staying—!"
"He's staying—I've made it out—to take anything that comes or calls upon him. To take," Maggie went on, "even that." Then she put it as she had at last put it to herself. "He’s staying for high decency."
"Decency?" Mrs. Assingham gravely echoed.
"Decency. If she should try—!"
"well—?" Mrs. Assingham urged.
"Well, I hope—!"
"Hope he'll see her?"

And I mean you're missing a few hundred pages of context from that scene but trust me, it doesn't help. I complained about the dialogue in Green Grass, Running Water (albeit for a different reason), but I'd take that any day over this.

Quick aside to also mention a gross line that James apparently had to throw in about a vendor acting on a rare scruple that is "almost unprecedented in the thrifty children of Israel." Like, get out of here. I didn't even know that the character was Jewish until the appearance of the racial slur!

I wish I could've loved this. I was so looking forward to reading more Henry James. After six hundred pages, though, I feel like I deserve clarity rather than ambiguity. Besides the next two of his books on The List, I'll stick with his earlier work in the future.

"You've seemed these last days—I don't know what: more absent than before, too absent for us merely to go on so. It's all very well, and I perfectly see how beautiful it is, all round; but there comes a day when something snaps, when the full cup, filled to the very brim, begins to flow over. That's what has happened to my need of you—the cup, all day, has been too full to carry. So here I am with it, spilling it over you—and just for the reason that is the reason of my life. After all, I've scarcely to explain that I'm as much in love with you now as the first hour; except that there are some hours—which I know when they come, because they almost frighten me—that show me I'm even more so. They come of themselves—and, ah, they've been coming! After all, after all—!"