76. The Prime of Miss Jean Brodie by Muriel Spark

Year Published: 1961
Pages: 128
First Sentence: The boys, as they talked to the girls from Marcia Blaine School, stood on the far side of their bicycles holding the handlebars, which established a protective fence of bicycle between the sexes, and the impression that at any moment the boys were likely to be away.
Rating: 2/3 (meh) 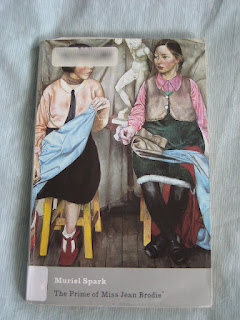 Review:
So I think that The Prime of Miss Jean Brodie is the first book on The List that I just really don't know what to say about, at all. There was a lot about it that I liked (just look at that first line!), but I'm not sure if it was its brevity, or the way it's written, or the fact that I was pretty stressed while reading it, but basically the whole thing just sort of washed right over me without leaving much of an impression.

The story is about Jean Brodie, a teacher of junior students at the Marcia Blaine girls' school, and her "set," consisting of Sandy, Monica, Rose, Jenny, Eunice, and Mary. This is in Edinburgh (which I always read as "E den burg," ugh), by the way, over the course of several years in the 30s, and then beyond a bit, too. Basically Miss Brodie is a sort of emancipated woman who wants to create the girls in her image, and also she's kind of a huge tool. The book isn't so much about her as it is about the fallout of her influence on her set, and what becomes of all of them, and also a few scandalous things that I won't get much into so that I don't spoil them for you. But I should at least mention that it's really nice to have a female perspective for once (the last book on The List about a woman, written by one, was The Death of the Heart.. which I was overly mean to, and the only other one besides that was Wide Sargasso Sea).

I love the portrayal of pretty much every character in this book, sketched broadly but distinctly for the most part (a bit like the ones in Loving), although there isn't enough space to really flesh out all the members of the set. I really enjoyed the writing style as well. Apparently the technique Muriel Spark employs here is called "prolepsis" or flashforward (the English majors in the audience are laughing at me right now), and I've seen it before and love it every time I encounter it. It's revealed very early on that Mary will die young, and that Sandy will become a nun, making it even more imperative to read on and find out how the blanks will get filled in (I seem to recall a fair bit of this sort of thing in Midnight's Children, but I could be remembering wrong).

I have to apologize for this review being all over the place and indecisive and just generally unhelpful, anyway. The book is short enough that I can safely say that it's worth a read, even though I don't know what to make of it myself. Mostly I just can't decide whether I'd care to read it again, or, like, whether I even liked it. Sandy's imagination probably makes it worthwhile all by itself, but I'll let you decide.


'Do you think Miss Brodie ever had sexual intercourse with Hugh?' said Jenny.
'She would have had a baby, wouldn't she?'
'I don't know.'
'I don't think they did anything like that,' said Sandy. 'Their love was above all that.'
'Miss Brodie said they clung to each other with passionate abandon on his last leave.'
'I don't think they took their clothes off, though,' Sandy said, 'do you?'
'No. I can't see it,' said Jenny.
'I wouldn't like to have sexual intercourse,' Sandy said.
'Neither would I. I'm going to marry a pure person.'
'Have a toffee.'