Year Published: 1904
Pages: 532
First Sentence: In the time of Spanish rule, and for many years afterwards, the town of Sulaco—the luxuriant beauty of the orange gardens bears witness to its antiquity—had never been commercially anything more important than a coasting port with a fairly large local trade in ox-hides and indigo.
Rating: 1/3 (don’t bother) 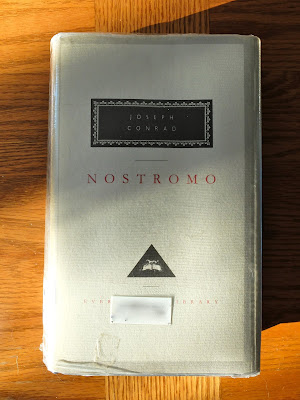 After the ordeal that was The Rainbow, I imagined that I'd have a better time with Nostromo. I couldn't remember having any major issues with the readability of Lord Jim or Heart of Darkness, plus this is supposedly Joseph Conrad's best book, plus maybe Ridley Scott's a fan? In any case, and perhaps as usual, my assumptions were all wrong. Nostromo is a terrible book.

There are three parts to the book. The first is entirely description and establishing details. This is unfortunate because it goes on for over a hundred pages, at which point I was utterly uninterested in what followed. Throughout my reading of this book, I found it almost impossible to concentrate on, to the point that I was reading the words but not actually taking in any of their meaning. I could read and think about other things at the same time. I've seldom read anything this tedious, including The Rainbow's nonsense, which at least had the advantage of being scandalizing.

Nostromo in this book is a character, not a spaceship. He is admired by all who know him, and is entrusted with absconding with a load of silver from a mine during a rebellion, or some such nonsense. Basically the book is concerned with the question of whether a man who is only good for the sake of his reputation is really a good man. Conrad explores this question in exhaustive detail for about four hundred pages too many and seems to come to the conclusion that the answer to that question is "no."

It's hard to write about this book given how hard it was to read. I can say that the only character who finally came alive for me was one Dr. Monygham, whose role in the story I don't comprehend. However, the account of the torture he suffered in his past was arresting to say the least, although too long to quote for this review. Initially I got some joy from silver mine owner Charles Gould's persistent refrains of "My dear, you seem to forget that I was born here." That was squashed before the end of the first part of the book. None of the other characters are very interesting, or if they are Conrad draws them in the most boring way possible.

Honestly I don't know how this got to be known as Conrad's best work. His other two books that I read were undoubtedly better. This one might have been on par with Heart of Darkness if it were much, much shorter, but I doubt it. I hope that The Secret Agent is better, because it's literally the next book on The List.

It was part of what Decoud would have called his sane materialism that he did not believe in the possibility of friendship between man and woman.
The one exception he allowed confirmed, he maintained, that absolute rule. Friendship was possible between brother and sister, meaning by friendship the frank unreserve, as before another human being, of thoughts and sensations; all the objectless and necessary sincerity of one's innermost life trying to react upon the profound sympathies of another existence.