R39. The Haunting of Hill House by Shirley Jackson

First Sentence: No live organism can continue for long to exist sanely under conditions of absolute reality; even larks and katydids are supposed, by some, to dream. 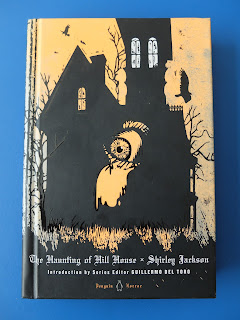 Review:
It's taken a long time for me to get around to writing this review, so I almost decided to just not write it. But given that I already left it off of my year end wrap up for 2013 and how I really want to spread the word about this book, here we are after all. (And let me explain, since I am actually posting this in May of 2016: I originally read the book and wrote the review in late 2013/early 2014. I have… quite a backlog of Random books.)

Anyway, the book easily surpasses every single one of these movies in the creepy and super good departments. I'm not sure if I've ever read "The Lottery" or just know of it by reputation, but I feel like I can state with confidence that Shirley Jackson is a genius after having read just this one book.

Doctor Montague provides the impetus for the events of the novel. He wants to study spookiness, so he discovers Hill House and invites a group of people to spend several weeks of summer there with him. These people have all had some sort of experience with the unexplained. Most don't respond. The two who do: Eleanor Vance, who previously experienced a rain of stones on her home as a girl, and Theodora, a possibly-lesbian possible-psychic. Rounding out the quartet is young Luke Sanderson, a member of the family that owns the house.

Creepy things begin to happen almost instantly upon the characters' arrival at Hill House. It is a place of dreadful and oppressive silence (except at night), odd angles, clouded history, and doors that won't stay open. Eleanor is the true main character (other than the house, that is), a woman in her early 30s who has cared for her sick mother for eleven years, and is now shiftless, unwanted, and friendless. From the very beginning, the house gets her firmly in its clutches. The subtle ways the stress of the experience drives wedges between all of the characters are wonderful to behold as well.

There is so much good stuff in this book. There were parts of it that made my skin crawl, particularly when Eleanor first enters the house and the way her conversation with Mrs Dudley is immediately duplicated with Theodora. The interpersonal interactions are spectacular to read and so is the manipulation of Eleanor. Really the whole thing is just the best haunted house story I've ever read. I'm not sure that the geometric oddity of the house as described by Dr Montague is possible as written, but that's my only complaint and it's one I don't care about.

Read this book, but maybe do it in the daytime.

No human eye can isolate the unhappy coincidence of line and place which suggests evil in the face of a house, and yet somehow a maniac juxtaposition, a badly turned angle, some chance meeting of roof and sky, turned Hill House into a place of despair, more frightening because the face of Hill House seemed awake, with a watchfulness from the blank windows and a touch of glee in the eyebrow of a cornice.