Year Published: 1915
Pages: 459
First Sentence: The Brangwens had lived for generations on the Marsh Farm, in the meadows where the Erewash twisted sluggishly through alder trees, separating Derbyshire from Nottinghamshire.
Rating: 1/3 (don't bother) 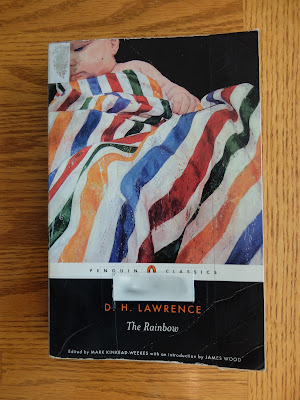 Between The Rainbow, Tropic of Cancer, and Portnoy's Complaint, I seem to be in the middle of a string of bad, bewildering old sex novels. Considering that the novel at hand, by D. H. Lawrence, is now over a hundred years old, I think it's obvious where the "bewildering" thing comes in. Other novels from this decade feature a lot less nudity, let's put it that way.

As for the bad, let's get into it.

It's been a long time since I read something as unbearably slow-moving as this book. It's about three generations of the Brangwen family. It begins with Tom Brangwen as a young man in the mid 1850s. He marries a Polish widow who is older than him, named Lydia Lensky. She has a young daughter, Anna, who Tom adopts. When Anna gets to be a teenager, she meets Tom's nephew, Will Brangwen, and the two of them fall in love and get married. They have some number of children, perhaps as many or more than eight (of all the details that are belaboured in this book, the number of Anna's children isn't one of them). The oldest of these children is Ursula Brangwen, and she is Lawrence's favourite character. She has two love affairs, one with her teacher Miss Winifred Inger and one with a young Polish baron-in-exile (I think?), Anton Skrebensky. Ursula's adventures comprise most of the latter half of the book, which is structured such that as soon as the next generation is old enough to take on the thread of the narrative, the previous generations' issues are immediately dropped.

This book was so boring that I sighed out loud probably half a dozen times while I was reading it. Lawrence's prose is so repetitive I could barely stand it. This was especially frustrating, because amid the endless descriptions of incomprehensible religion and how tough it is for any of the couples in the book to get along, Lawrence is landing on some real truths about life and relating to other people. He's also delving into something that we'd all like to deny, which is how sexuality defines and drives most or perhaps all of a person's actions. Unfortunately that's tedious to read about, and also I think it's illustrating that Lawrence himself was perhaps a bit sex-obsessed in a creepy way.

How do you write about sex in 1915? Well, sometimes it's hard to tell. There was even a moment or two when I found myself wondering if Lawrence was depicting marital rape or if I was just imagining things. For example, I think this passage is probably about sex, but he's not coming right out and saying it:

And she loved the intent, far look of his eyes when they rested on her: intent, yet far, not near, not with her. And she wanted to bring them near. She wanted his eyes to come to hers, to know her. And they would not. They remained intent, and far, and proud, like a hawk's, naive and inhuman as a hawk's. So she loved him and caressed him and roused him like a hawk, till he was keen and instant, but without tenderness. He came to her fierce and hard, like a hawk striking and taking her. He was no mystic any more, she was his aim and object, his prey. And she was carried off, and he was satisfied, or satiated at last.

Sometimes it's more obvious. Incidentally, that's a scene between Anna and Will Brangwen, who have endless tumult between them until they decide to just bone all the time, and Anna discovers that she really really likes having babies. It is terribly weird. Here's pretty much the only thing that Lawrence writes about their reaction to her father Tom Brangwen's death:

At the funeral, and after the funeral, Will Brangwen was madly in love with his wife. The death had shaken him. But death and all seemed to gather in him into a mad, overwhelming passion for his wife. She seemed so strange and winsome. He was almost beside himself with desire for her.
And she took him, she seemed ready for him, she wanted him.

So weird. It's so cursory partly because Tom Brangwen's death is approximately where the narrative becomes more concerned with Ursula, but that's still a bizarre thing to focus on with respect to this couple of characters whose thoughts and feelings we've been tracking in unbearable detail for the past hundred pages or so.

And how many times do you think you could see the word "fecund," or a variant of it, before going mad? Because on two pages, back to back, in this book, Lawrence uses the word "fecund" or "fecundity" no fewer than thirteen fucking times. I finally looked it up. It just means "fertile." Oh, and on those same two pages? The words "dark" or "darkness" show up twenty-four times, it just doesn't hurt your brain quite as much because those are much more normal words than the other one. So, my apologies to E. L. James, because apparently excessive word repetition is AOK after all, at least as far as the classics are concerned.

It's rather fitting that one of the settings in this novel is the Brangwen family's ancestral home called The Marsh. This is a book with interesting characters and occasionally brilliant observations all mired in a bunch of garbage prose. I thought it would never end, and I highly recommend that you not bother starting it in the first place.

When he came in at the door, his heart was blazed with pity and tenderness, she looked so lost and forlorn and young. She glanced up, afraid. And she was surprised to see him, shining-faced, clear and beautiful in his movements, as if he were clarified. And a startled pang of fear, and shame of herself went through her.
They waited for each other to speak.

As Ursula passed from girlhood towards womanhood, gradually the cloud of self-responsibility gathered upon her. She became aware of herself, that she was a separate entity in the midst of an unseparated obscurity, that she must go somewhere, she must become something. And she was afraid, troubled. Why, oh why must one grow up, why must one inherit this heavy, numbing responsibility of living an undiscovered life? Out of the nothingness and the undifferentiated mass, to make something of oneself! But what? In the obscurity and pathlessness, to take a direction! But whither? How take even one step? And yet, how stand still? This was torment indeed, to inherit the responsibility of one's own life.