65. A Clockwork Orange by Anthony Burgess 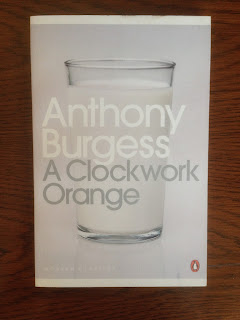 Review:
It turns out that I’d forgotten more than I remembered about A Clockwork Orange and what happens in it, and what it’s like to read.

I can tell you for sure that I was 16 the first time I read this book.  It was the summer before my last year of high school, and I was prepared for the nadsat slang, but not for what a miserable experience I’d have going to summer camp for the first time in my life at that advanced age.  I had no patience for the bizarre intensity of camp friendships and love affairs, or the silly group games.  I affected a habit of wearing a row of safety pins on my polo shirts, and painting my pinky fingernails black.  I read A Clockwork Orange.  It was a week long camp and the book is a short one, but if I read anything else that week, I’ve long since forgotten it.

The edition that I read then made a big production of the fact that it included the final chapter, a chapter that didn’t appear in the original American edition of the book (but had always been in the UK one) and also doesn’t show up in the movie by Stanley Kubrick.  I’ll probably have to get into some spoilers about this, so look out.  Anyway, I was paying pretty close attention to the ending.  I was also a naive idiot without taste (now I’m just a naive idiot with a little bit of taste and an extreme wariness of other people’s), so I took a camp counsellor’s word for it when she said that the movie was hilarious.

I have a lot of regrets about watching that movie, but none about reading and loving this book.

In case you’re neither an Anthony Burgess nor a Kubrick fan and have missed the greater cultural impact of their respective works titled A Clockwork Orange, it is the story of a 15 year old boy named Alex, who is pretty much a juvenile delinquent.  Well, not “pretty much,” that’s exactly what he is.  He’s the embodiment of the violent youth so feared for so long by so many people.  He’s committed all kinds of assault, stolen money, vandalized property, done all sorts of drugs, and he loves classical music like whoa.  By some miracle, he is just a little bit charming, which is I think the only thing that keeps this book afloat.  He gets arrested for the not-so-accidental murder of an old woman amidst a bunch of cats, is betrayed by his friends, and ends up in jail.  The jail is overcrowded, and after two years of good behaviour, Alex murders one of his cellmates, sort of in self-defense but not really.  This leads to him becoming a candidate for the Ludovico technique/method/thingy, a sort of aversion therapy involving the administration of drugs while being strapped down and forced to watch violent acts, leaving the person being treated physically incapable of committing violence.  It works, to the point that Alex decides to kill himself.  That doesn’t work, although in being treated for his wounds, he goes right back to the way he was.

Which is where the book ends as of its first American publications.

Where it really ends, though, is much more thought-provoking.  Months later, Alex has accumulated a new gang of friends but he’s not really feeling the urge for ultra-violence like he used to.  He’s almost eighteen and against all odds, it seems that he really will grow up and leave all this behind him.

This is the first book that I can ever remember pondering the meaning of.  It’s set in the not-too-distant future of the past, i.e. Burgess’s present.  My thoughts at the time were that it extrapolates from the youth of today to the youth of tomorrow as being ever more violent, more heedless, etc. but that growing up will forever be a civilizing force.  Having read it again, I think that’s probably overly simplistic.  The violence that Alex and his friends engage in is senseless and opportunistic, though, not necessarily motivated by their socioeconomic status (although in this future communism seems to be a much more dominant force, and also the State is rather more explicitly controlling), so I think what’s suggested here is that boys will be boys will be ever wilder boys* in the face of ever increasing efforts at control.

Anyway, even if that central thing doesn’t quite sit right, there are a lot of solid concepts that are touched on that somewhat make up for it: police corruption and brutality, prison crowding, free will.  Also, the nadsat slang by itself is an impressive achievement.  Burgess invented a slang that heavily uses Russian words and then throws in some rhyming slang and other things, in order to avoid dating the book too quickly.  Alas, the Russian usage does still date it somewhat, but the fact that it can be read without the inclusion of a glossary is just amazing.  Anyone who’s been reading this blog for any length of time will know that I have almost no patience for complicated language, and so the fact that I love this is worthy of note.

I must say, though, that while I don’t regret having loved this book for so many years, I’m not sure that I can keep it among my favourites anymore.  I suppose I forgot the extent of Alex’s violence, or it didn’t quite hit me (hur hur) full force when I read the book the first time, but this time around I wasn’t so willing to let him off the hook for growing out of his violent impulses.  I’m sorry, dude, but just because you’re not in the mood for raping women and beating up old men for no reason anymore, doesn’t mean that I want you to be able to meet someone, fall in love, and have a child.

So.  Read this for the medium but maybe not the message.

*One criticism I do need to make of Burgess and this book in particular are that women aren’t really portrayed with much agency or, like, anything.  Alex’s mom is spineless, his friend’s wife is a ditz, the two young girls that he takes home and sexually assaults (if not outright rapes) are dumb too, and the woman that he gang rapes with his original friends ends up curling up and dying.  Burgess wasn’t a particular fan of feminists, based on at least one essay in But Do Blondes Prefer Gentlemen?, and yet somehow he wrote One Hand Clapping, a woman’s story in first person and one of the best examples of a distinct character voice that I can think of, in which you hear her voice in your head instead of your own while you read the book.  If anyone knows of a scholarly article out there quantitatively comparing Burgess’s and Hemingway’s bad attitudes toward women, please contact me immediately.  Tl;dr it’s never clear what the girl nadsats are up to.
Posted by M.R. at 11/22/2015 06:00:00 PM