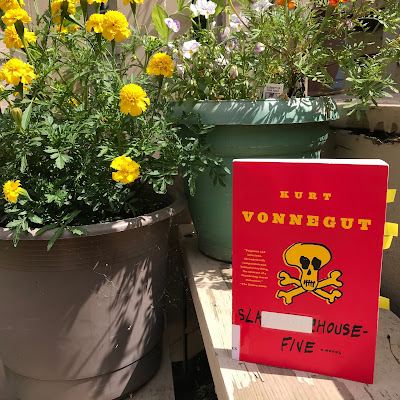 Review:
I've found over the years that other writers really love to throw around Kurt Vonnegut's name, as well as the title of this book, Slaughterhouse-Five. Usually in the context of young characters in high school or college. I myself first read him in university, probably because of seeing his name so often, picking up Hocus Pocus one summer and having my mind a little bit blown and a little bit delighted by the simplicity and humour in his prose.

Fast forward to spinster-me finally reading Slaughterhouse-Five with no intervening forays back into Vonnegut's oeuvre, and I have to say I was just a tad underwhelmed.

The story is non-chronological so it's hard to either spoil or not spoil it. Our main character is Billy Pilgrim, witness to the firebombing of Dresden in Germany by the Allied Forces during the Second World War. Billy has apparently become unstuck in time, however, through his interactions with an alien race called the Tralfamadorians. The Tralfamadorians experience the fourth dimensions, time, differently than humans do: they see the whole of it, basically, and so they have a very different sense of action and reaction than we do. More than likely, Billy Pilgrim has been so damaged by his war experiences that this sense of being unhinged and communing with aliens is a manifestation of severe PTSD. I'll leave that to you to decide. So it goes?

Now don't get me wrong, I really enjoyed this book. That simple language and humour is in this book just as much as the much later example of Vonnegut's work that I read previously. It's exactly the kind of prose style that I engage with best.

However, by reputation I expected this book to be really hard-hitting and instead it just sort of... wasn't. A big part of the problem is that the chronological fragmentation of the book diminished the buildup to the centrepiece climax with the bombing of Dresden. Without that fragmentation, though, we lose the sense of how Billy is experiencing the world, and I totally get why Vonnegut wrote the book this way. It's just that it didn't work for me. By the time I got to reading about the bombing I experienced it more as an afterthought.

I also made the mistake of reading a little bit about the bombing of Dresden after reading the book but before writing this review. Vonnegut cites a death toll of 135 000 in the bombing, when in reality it seems to have been closer to 25 000 (not to say that's somehow not tragic). This figure comes up late in the book and is ancillary to the core themes of the pointlessness of war and its destructive power, so it's not as if the incorrect figure derails the whole thing. It did give me pause, though, and I wish that Vonnegut could have made his point citing a more accurate figure.

This is a good novel, and I think you should read it. It's got optometry and war and aliens and a smattering of religion, a movie star, a hobo, a Green Beret. I just hoped it'd really blow my mind, and it didn't.

Like so many Americans, she was trying to construct a life that made sense from things she found in gift shops.

Billy turned on his television set, clicking its channel selector around and around. He was looking for programs on which he might be allowed to appear. But it was too early in the evening for programs that allowed people with peculiar opinions to speak out. It was only a little after eight o'clock, so all the shows were about silliness or murder. So it goes.