Year Published: 1901
Pages: 217
First Sentence: He sat, in defiance of municipal orders, astride the gun Zam-Zammah on her brick platform opposite the old Ajaib-Gher—the Wonder House, as the natives call the Lahore Museum.
Rating: 3/3 (read it!) 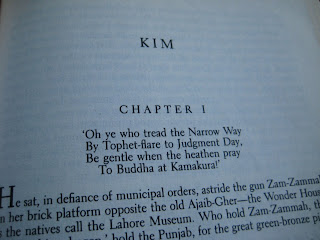 Review:
Because I couldn't find Kim in its own volume at the library, I ended up getting it in a book of "The Best Fiction of Rudyard Kipling," which meant that after I was done Kim I finally got to read The Jungle Book, which I'd argue is Kipling's much more famous work. However, reading the two books in such quick succession also meant that I got to see how far superior Kim is, in its story structure especially.

Kim O'Hara is a young Irish boy who has basically gone native in India. His mother died when he was a baby, and his alcoholic father, "a young colour-sergeant of the Mavericks, an Irish regiment," became a railway man, and brought baby Kim with him everywhere. Eventually Kim's father becomes an opium addict, and dies, leaving Kim with some identifying papers and nothing else, so that Kim basically just ends up running wild in the streets of Lahore.

That's where the book opens, with Kim and some other children playing where they shouldn't be, outside of a museum. A strange-looking man appears and Kim is immediately curious about him. It turns out that the man is a Tibetan lama, who left his monastery to search for a legendary "River of the Arrow." Kim latches onto the Lama as his new chela, or disciple, to beg for the lama and help him around the countryside on his search.

The two of them spend some time on the road, until by a strange coincidence, they end up encountering the Mavericks en route to Sanawar. The identifying papers that Kim's father left him are kept in an amulet that Kim wears around his neck, and when these are discovered, the regiment pretty much instantly takes Kim in hand, to finally send him to school and so on. Kim is very unwillingly separated from the lama.

I'll stop there for spoilers' sake, but say that the story really seems to be about the relationship between Kim and the lama and how that relationship illustrates Kim's struggle between the world of the "sahibs" (British colonist types, in this case) and that of the natives. It's this relationship that makes the book extremely readable. Obviously, the lama is a Buddhist, and thus prohibited from developing attachments (or at least I think that's how it works), but he undeniably loves Kim by the end of the book, and Kim has a tremendous amount of love and respect for the lama.

The book also seems to be a love letter to India from Kipling. All of the descriptions are very vivid, and the book is full of really remarkable characters. India isn't quite as much of a blind spot as the entirety of Africa is for me (I've seen Ghandi, after all, hahaha), but every time I encounter it in fiction it seems to be the most complex and bizarre country in the world. Also, it's very clear that the country Kipling is describing here is just the wilder, more old-fashioned version of the India portrayed by Salman Rushdie in Midnight's Children.

I like Kipling's writing. He's very good at describing very unfamiliar settings (for a so-called Western reader, anyway), and his sense of humour is never far away. (I've loved the Just So Stories for a very long time.) Also, he avoids the horribly annoying thing that a lot of writers do when they're giving dialogue to people who speak accented or a vernacular English, where all of the apostrophes and misspellings make that person's dialogue almost unreadable, and insulting too in some cases. Kipling just makes judicious use of some extra letters here and there to get the point across. I know I'm harping about this, but I really hate it when writers do it.

Overall the book is good. It's not one of the best of the 3/3s, because the story is pretty simple, but it's definitely worth a read.

Quotations:
(I didn't find anything particularly quotable in the book, so instead here's a stanza from "The Sons of Martha", one of Kipling's good bad poems that I have a bit of a soft spot for. -M.R.)

They finger death at their gloves' end where they piece and repiece the living wires.  He rears against the gates they tend: they feed him hungry behind their fires.  Early at dawn, ere men see clear, they stumble into his terrible stall,  And hale him forth like a haltered steer, and goad and turn him till evenfall.
Posted by M.R. at 1/08/2012 12:02:00 PM