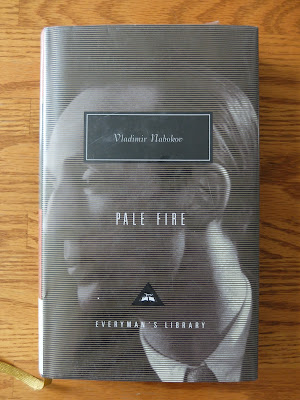 I need to learn not to look forward to List books, because the process seems to end up colouring my opinion in strange ways, usually not in the novels' favour.

With Pale Fire, the first time I've ever read Vladimir Nabokov (but not the last, with Lolita appearing way up in the Top Ten of the List), I saw someone comment somewhere that they thought Mark Z. Danielewski was striving (and perhaps failing) to emulate Pale Fire with his novel House of Leaves.

Having read Pale Fire, then: yes, maybe, but the two books are very different, and the architectural aspect of House of Leaves makes me prefer it to Pale Fire. A lot of people find Danielewski gimmicky, but I'm a fan, especially of that particular novel (the others are of more ambiguous value).

Enough about a different book entirely.  In case you've never read either one of the two novels I've mentioned so far, here's what Pale Fire is, and the order that I read it in.  The novel consists of a Foreword and Notes by a fictional academic from a country called Zembla, named Charles Kinbote.  He is writing said Foreword and Notes on the subject of a 999-line poem in four cantos called "Pale Fire" written by a fictional poet named John Shade.  As the reader discovers very early on, John Shade died after composing these lines, his final work.  The first sentence I've quoted above is from the Foreword, and the four lines below are actually the first four lines of Canto One of Shade's poem. I personally read the book straight through: I began with the Foreword, read the poem uninterrupted (contrary to Kinbote's advice to begin with his notes and go through the whole thing several times), and then proceeded to the Notes, and returned to reference the lines of the poem while going through the Notes.  I must admit that I did not make it through the Index, however.  I'm sure there are other ways to approach it, though.  Normally I skip forewords and introductions, though (because they always spoil this sort of literary classic), including the introduction that appears in the edition of Pale Fire that I read*.

If one begins with the Foreword, one is treated to a very creepy and suspicious borderline rant by Kinbote about his relationship with Shade and how he came to possess the manuscript for the poem.  He also, disconcertingly, accurately predicted that the second canto would be my favourite.  I didn't spend an enormous amount of time puzzling my way through the intricacies of the poem.  The Notes, then, clarify some things in Shade's poem, and also get into Kinbote's psyche and actions, all interwoven with the story of an exiled King that Kinbote had urged Shade to write poetry about. It's cool and occasionally eyebrow-raising, but I have to admit that I found the prose in this novel exhausting, to the point that I took at least three naps over the course of my reading, and that's mostly why it didn't earn a 3/3 rating.

I'm really really really not familiar with the kind of literary criticism that Nabokov is sending up, either, and if I were I might've enjoyed it more. Nabokov is a good writer (there's an absolutely harrowing passage on the topic of suicide, the note to Line 493, which I would've included here if it hadn't been so long), and I think my problems with the prose were possibly intentional style choices.  I like that this book exists in the world, but like some of the other List books that I haven't really connected with, I think it went a bit over my head and might not be for me.

* The Introduction, by Richard Rorty (a real person, not yet another invention of Nabokov's, I looked this up) included the following helpful note:


Warning: this Introduction not only gives away the plot of Pale Fire, but presumes to describe the reader's reactions in the course of a first reading of the book — reactions which will not occur if the Introduction is read first.  The first-time reader may wish to postpone the Introduction until he or she has finished the Index.

So as usual, I didn't bother to read it.

I was the shadow of the waxwing slain
By the false azure in the windowpane;
I was the smudge of ashen fluff—and I
Lived on, flew on, in the reflected sky.