Pairing: Rich girl and foundling/eventual blackguard
First Sentence: -1801- I have just returned from a visit to my landlord—the solitary neighbor that I shall be troubled with.
Climax: "I was only going to say that heaven did not seem to be my home; and I broke my heart with weeping to come back to earth; and the angels were so angry that they flung me out into the middle of the heath on the top of Wuthering Heights; where I woke sobbing for joy. That will do to explain my secret, as well as the other. I've no more business to marry Edgar Linton than I have to be in heaven; and if the wicked man in there had not brought Heathcliff so low, I shouldn't have thought of it. It would degrade me to marry Heathcliff now; so he shall never know how I love him: and that, not because he's handsome, Nelly, but because he's more myself than I am. Whatever our souls are made of, his and mine are the same; and Linton's is as different as a moonbeam from lightning, or frost from fire." 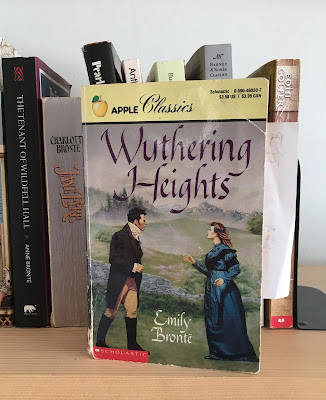 Review:
If you remember way back as far as my Jane Eyre review, I was exposed to Emily Brontë and her sister Charlotte at a very young age. Although both Jane Eyre and Wuthering Heights feature young characters, Jane captured my heart by being a character I could relate to. If I had to guess, I'd say that my first time through Wuthering Heights I had very little idea of what was going on besides the fact that a man's housekeeper was telling him an extremely long and detailed story. I did try to read the book again probably a dozen years ago at least, and didn't make it to the end. Recently it'd been calling to me from its place on my bookshelf, though.

A man named Lockwood rents a house, Thrushcross Grange, in a remote part of England as a means of escape from society. His landlord is named Heathcliff, and when Lockwood goes to Heathcliff's residence, Wuthering Heights, to pay his respects, he encounters a very bizarre situation. Fortunately for him, his housekeeper, Nelly Dean, is a longtime servant from the Heights, and can tell Lockwood the whole sordid story.

Wuthering Heights belonged to the Earnshaw family, Mr. and Mrs. Earnshaw and their two children, Hindley and Catherine. One day, Mr. Earnshaw brought a child home with him from a trip to Liverpool. This child would be called only "Heathcliff," and became a favourite, causing Hindley to hate him. No such issues with Catherine: she and Heathcliff were always together. (Note: we are not going to talk at all about race in Wuthering Heights because I am not at all equipped for that conversation.)

Eventually, Mr. Earnshaw dies, and with Hindley in charge, Heathcliff doesn't fare well. Catherine also meets Edgar and Isabella Linton, neighbours who live at Thrushcross Grange in a much more typical situation. She doesn't exactly fall in love with Edgar Linton, but does grow to like him well enough and after a particularly bad case of crossed wires, marries him, while Heathcliff leaves to do God knows what for a period of several years. Also, Hindley gets married and then his wife dies of consumption after giving birth to a son, Hareton, who Nelly Dean cares for before going to live with Catherine and Edgar at Thrushcross Grange. The young couple is happy enough and things proceed calmly for a short while.

Heathcliff returns and over the course of several scenes of escalating wildness associated with his reunion with Catherine, she dies—after giving birth to a daughter who is also named Catherine but who I'll call Cathy for the purposes of a clarity I may not actually be able to achieve. Another result of the escalating wildness is that Isabella Linton falls in love with Heathcliff, elopes with him, and then suffers some pretty serious misery at Wuthering Heights before fleeing her horrible husband and giving birth to a sickly child named Linton. (Yes, there really aren't enough names to go around in this book. Also yes, the heroine dies halfway through.)

Hindley dies at some point but not before Heathcliff has taken everything that belongs to him. Hareton goes a bit feral with no civilizing influence around the place.

The next stage of the story is several years later, when Cathy is a young girl who has basically been raised entirely within the walls of Thrushcross Grange. Isabella dies, and Linton goes to live with his Uncle Edgar and Cathy, or he would if Heathcliff didn't decide to have the boy under his roof instead. Via a whole series of machinations designed to result in Heathcliff getting everyone's property, Cathy is coaxed to Wuthering Heights to marry her weak and whiny cousin Linton. Linton and Edgar both die right around the same time, which leads right about up to Lockwood's arrival on the scene.

After hearing this story, Lockwood decides he would rather not spend more time in the neighbourhood, and vacates his rental.

Several months later, he returns to the area on a hunting trip, and gets the rest of the story from Nelly: Heathcliff was basically haunted to death by Catherine, and Hareton and Cathy have fallen in love.

And they all lived happily ever after. One hopes.

I had a great time reading Wuthering Heights this time around. It is deliciously bleak. The body count surpasses some serial killer novels. It also has a perfect title.

Besides the perfection of the title and the name of the house, the strongest aspect of this book is its setting. The moor is a constant presence at the edges of the human drama. Without the remote location, one imagines that this story would, quite simply, be impossible. One has the impression of these two families being stranded in remoteness and desolation, with no hope of help. It's great.

The characters are the most interesting thing about the book. They are all so bizarre, and more than that, they are all so awful. Literally the only character who I think might be considered a truly good person is Hareton Earnshaw, of all people. He's rough around the edges but generally well-meaning. Virtually every other character is either cruel, cut-throat, dishonest, hypocritical, selfish, or five or six additional negative adjectives you can think of. Heathcliff is vengeful and violent. Catherine is vain. Lockwood is classist and snobbish. Nelly, whose ability to relate the events of twenty plus years before with such exacting detail still makes me laugh, plays a much more active role in the story than I remembered, and not always to benefit the other characters. She certainly wants to make her role seem to be that of a simple observer, but there's much going on there. She's an unreliable narrator and active participant.

If you start reading Wuthering Heights expecting a romance novel, you will have a bad time. If instead you go in knowing that it's more of a psychological thriller, I don't think you can fail to be entertained.

"Had I been born where laws are less strict and tastes less dainty, I should treat myself to a slow vivisection of these two, as an evening's amusement."