28. Tender Is the Night by F. Scott Fitzgerald

Year Published: 1934
Pages: 313
First Sentence: On the pleasant shore of the French Riviera, about half way between Marseilles and the Italian border, stands a large, proud, rose-colored hotel.
Rating: 1/3 (don't bother) 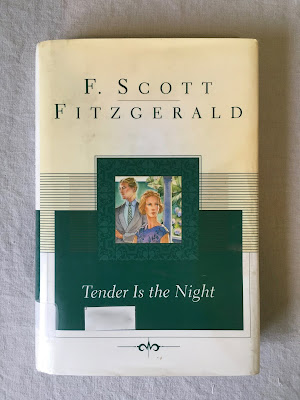 Review:
Full disclosure, first of all. I got Tender Is the Night from the library, and for some reason, the copy they gave me smelled like it was drenched in perfume. Although I suppose there are worse things that a library book could smell like, this nevertheless had a negative physiological impact on my reading experience for this book.

Full disclosure, part deux. About halfway or two thirds of the way through reading this, I got curious and decided to read Zelda Fitzgerald's wikipedia page, given that she was famously mentally unstable and I thought perhaps there was a bit of her in Nicole. Whereupon I discovered that F. Scott Fitzgerald was a total ass to her when it came to this book and her own, Save Me the Waltz. So, I hadn't been on his side since about twenty pages in to the novel, but that really made me angry.

The book also suffers from the fact that it's very boring and self-indulgent.

I have never read any of Fitzgerald's work before, although of course The Great Gatsby is sitting there up in second place on The List and I'm honestly still looking forward to it. But Tender Is the Night may be evidence that I shouldn't go looking beyond Gatsby when I eventually get there.

So anyway, this is about Dick and Nicole Diver. They are the ubiquitous Rich Americans in Europe*. If you read the first hundred pages of this book, though, you'd probably think that it was about young movie star Rosemary Hoyt and her mommy issues, but you'd be gravely mistaken. Dick is a psychologist or psychiatrist or whatever the name for a doctor dealing with mental illness was in the 20s and 30s. Nicole is his young patient, whose horrifying backstory drops like a bomb somewhere in the middle of the book.

I'm not going to tell you anything that happens, because it's all pointless and you can probably guess it anyway. There's stuff about Dick and Nicole's relationship, how they got together and how they grow apart. There's drinking and carousing in Paris. If your book has a young movie star in it then probably the male lead will eventually have sex with her. Blah blah blah.

I thought this book would be a quick read but it was endless and so silly. At least with my previous 1/3 (The Golden Bowl, also a Rich Americans in Europe book, incidentally), I thought the story should've been interesting but I just didn't know what was going on most of the time**. In the case of Tender Is the Night I suppose the characters are all fine (Dick could have been a self-insert character who is forgiven everything, but he isn't, so that's good at least) and the prose even trends to very good in places, but that's simply not good enough for #28 on The List.

* I should compile all the books on The List that feature Rich Americans in Europe, because you probably don't really need to bother with any of them, to be honest.

** And it's at this point that I'll note: man, The List and I have been having such a good run lately!

He saw that no provision had been made for him, or for Nicole, in Mrs. Speers' plans—and he saw that her amorality sprang from the conditions of her own withdrawal. It was her right, the pension on which her own emotions had retired. Women are necessarily capable of almost anything in their struggle for survival and can scarcely be convicted of such manmade crimes as "cruelty."