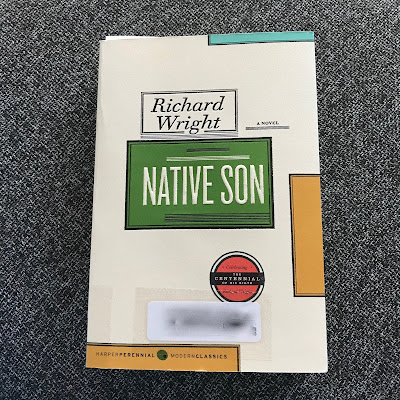 Review:
Well, if you've ever wanted to read a book and just be utterly uncertain of how to feel about it, have I got a suggestion for you!

Richard Wright's Native Son is set in Chicago in the 1930s. I have a very hard time to resist the temptation to imagine Studs Lonigan being just around the corner from all the action, because the two works concern some of the same things, just in very different ways. Bigger Thomas is one of the young black men that Studs is so racist toward, despite their similarities.

Before I get any further, I have to say that it's impossible to review this book without spoiling a lot of it. If you'd rather not be spoiled, just know that I highly recommend it for being about the kind of racial inequality issues whose echoes are still very much being felt today.

The book is split into three parts: Fear, Flight, and Fate. In Fear, Bigger goes to work as a driver for a wealthy white family, but only after screwing around and fighting with his friends, a group of young men who are all poor and jobless in Depression-era Chicago. The wealthy white family are the Daltons, with Mr. Dalton being a real estate mogul of sorts, who owns and rents out buildings in the "Black Belt." He charges higher rent for worse accommodations than in other parts of the city. Bigger lives in one of these buildings, in a single room with his mother, younger brother, and younger sister. Mr Dalton has a 20-something daughter, Mary. Bigger's first task is to drive Mary to a college night class.

Over the course of several increasingly harrowing scenes, Bigger's task is derailed, as Mary instructs him to take her to meet up with her Communist boyfriend Jan. The two white people treat Bigger in a way that makes him feel humiliated (they speak to him frankly and condescendingly and ask him to take them to a restaurant where black people eat), and then all three of them end up drunk. Mary is drunkest of all, and Bigger ends up helping her to her room in the wee hours of the morning. Mrs Dalton walks in on this, but being blind, can't see Bigger. In order to avoid discovery and prevent Mary from crying out, Bigger smothers her, and she dies. He tries to conceal his crime by stuffing her body into the furnace in the Dalton home.

Bigger must contend with this crime in the Flight section of the book, and he feels emboldened by it. He sees Bessie, who is his long-suffering girlfriend, and tries to enlist her help with a ransom note scheme inspired by Leopold and Loeb. This works only until a bunch of reporters discover Mary's remains (Bigger has been too afraid to empty the ashes out of the furnace). Then he's really on the run. The police and other searchers invade the whole Black Belt to search for him. Bigger goes to Bessie first, because he knows she might give him away. He rapes and then brutally murders her. The authorities eventually corner him and arrest him.

The final part of the novel, Flight, is where everything you might expect to happen, does. There's basically a kangaroo court, in which Bigger's Jewish* lawyer, Boris Max, heroically tries to defend Bigger against a death sentence, in favour of life imprisonment, on the grounds that systemic racial injustice is the real reason for his crime. Max's closing argument is 24 pages long. Of course this is ignored and Bigger receives a death sentence.

In addition to the actual novel, I read an essay on its conception that was included in my edition. The text was a restored version from 1991 rather than the censored and somewhat shorter version from 1940.

This book is disturbing in a way that I haven't encountered often or maybe ever before. Bigger is the main character but he's truly the villain of the novel (though I agreed with so much of what Max says about institutional racism being the true evil). Bigger murders two women and also rapes one of them. She's the more vulnerable of the two and she gets only secondhand justice. He doesn't feel remorse for taking the lives of these women. He's violent and selfish and ignorant. The world he lives in has made him this way, but my God it's difficult to spend a whole book inside his head.

The content of Native Son feels bold and dangerous to me reading it today, and I can't imagine what it would've been like to encounter eighty years ago. Wright's prose is rhythmic and evocative of the emotions of his characters and he gets unbelievably deep into Bigger and his motivations (or lack thereof). He captures all of the characters in this novel so well, from wealthy hypocrite Mr Dalton and prissy rich white girl Mary to desperate, exhausted Bessie and Bigger's religious, long-suffering mother. Although the unique struggles of these black women aren't at centre stage in the novel, we see enough of them to appreciate their situation.

I won't say that I loved this book, and the simple fact is that as soon as Bigger becomes a rapist, I was no longer on his side. I don't know if this was something that Wright anticipated as being a reaction from his readers, but here we are. I don't think I ever want to read this book again. But I wholeheartedly believe that it's worth reading once.

* I don't really get into it in the review but this is a relevant fact in the novel.