51. The Naked and the Dead by Norman Mailer

Would this be a good time to mention I'm really excited about this Dunkirk movie? -M.R. 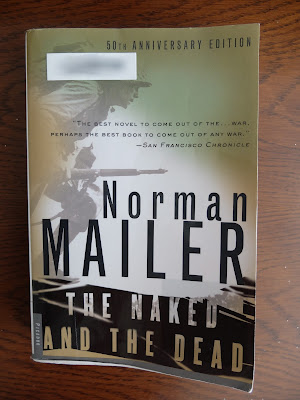 The edition of The Naked and the Dead that I read has a quotation from the San Francisco Chronicle on the cover, which says that this is "perhaps the best book to come out of any war." I looked at that askance and then realized that my experience with books about war is limited, to say the least. In the last year I suppose I've read We Band of Angels and the first two parts of Parade's End, but the nonfiction book was undoubtedly the one that I preferred (NB that my posting schedule is ludicrous at the moment, so I hadn't read And We Go On yet when I was originally writing this review). When it comes to The Naked and the Dead, From Here to Eternity is the closest analogue and it's so much worse. But I can't think of any one novel about war that's really struck me with any sense of profundity. Yet. Which is all to say I dispute the Chronicle's claim that this is the best book to come out of any war. Norman Mailer did actually experience war, but he was a very young man when he wrote this. I dragged my feet all the way through, taking over a month to read it, and I'm glad it's over.

The book is about a platoon of soldiers, following them from just before their landing on the fictional South Pacific island of Anopopei until the end of the battle there. Most of the first half of the novel involves almost nothing happening, and then the platoon is sent out on a gruelling patrol on the far side of the island, which takes up the remainder of the book. The second half is a bit more interesting (I thought everyone was going to die, and that got me a tiny bit breathless in parts), but not enough to leave me with the sense that this was worth my time.

Mostly Mailer is exploring each man's reactions to being at war and among his fellow soldiers, but he doesn't quite pull it off. The prose is often clunky, and there are too many characters to keep track of. Mailer helpfully includes "Time Machine" sections that describe many of the characters' backgrounds, and these are helpful, but come too late for many characters who I'd already spent multiple hundreds of pages trying to get a handle on. On the other hand, I actually detected the implied homosexuality of one of the characters for once! It was great! There's intriguing subversions of the "brothers in arms" narrative happening in this book as well. The relationships between the men are complex and fraught in ways that I haven't seen much in other war stories. The number of characters remains a problem, though. It's an ambitious move by a young writer to include so many varying perspectives, but it also means that in order to dive into each, he has to drag the novel out to an extreme length that robs it of any potential tautness and meaning because I was mostly too busy being bored to care about anything.

I suppose finally I need to mention the "fug" thing. Instead of using the actual F WORD (fuck, that is), the publisher changed out every instance of it (and there are many) with the nonsense word "fug." It is terrible. Sometimes it's invisible, other times it's glaringly ridiculous. My favourite publishing euphemism for swearwords is "unprintable," and that would probably have been an equally distracting usage here. I read a 50th anniversary edition, and I'd've been in favour of "fug" being expunged in favour of the actual word. But, here we are.