22. Appointment in Samarra by John O'Hara

Year Published: 1934
Pages: 220
First Sentence: Our story opens in the mind of Luther L. (L for LeRoy) Fliegler, who is lying in his bed, not thinking of anything, but just aware of sounds, conscious of his own breathing, and sensitive to his own heartbeats.
Rating: 3/3 (read it!) 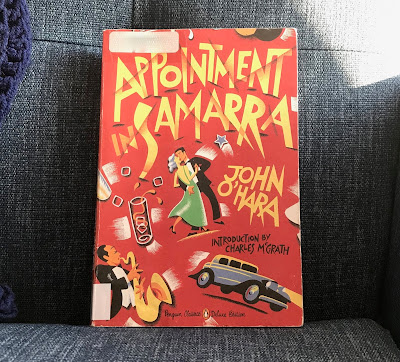 Review:
John O'Hara begins Appointment in Samarra with an epigraph explaining its title, a little story retold by my old pal W. Somerset Maugham from an old Mesopotamian tale. You should read the story, which I've photographed and included below, but basically it's about the inevitability of eluding Death. 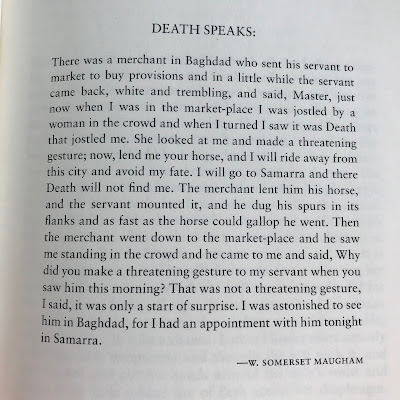 That's all fine and dandy but then the book actually gets started, and the tone makes you think it'll be a bit of a farce, like maybe the ending that the story foreshadows will be along the lines of Zuleika Dobson. We've got Lute and Irma Fliegler, middle-aged married couple moving up in the world, enjoying some companionable married sex before the madness of Christmas morning with their children. As she goes back to sleep Irma thinks about their new Jewish neighbours spoiling the neighbourhood, how wonderful her husband is, and wonders what the crowd at the Gibbsville, Pennsylvania country club might be up to. Cut to Julian English, country club denizen and Cadillac dealership owner, at this party in the wee hours of the morning, thinking about throwing a drink in Harry Reilly's face. Julian is the man who this book is actually about.

Things continue with this light tone for a while longer. Julian does throw the drink in Harry Reilly's face, though the reader doesn't actually get to witness the event. This causes a whole bunch of knock-on effects for Julian. Harry is a powerful man, an investor in Julian's business, and a prominent member of the Catholic community in Gibbsville. It's 1930 and there are only 25,000 people or so in Gibbsville, so Julian can't afford to lose any investors or potential customers. At this point the book takes its first turn for the worse and Julian makes another in a series of bad decisions.

I'll leave my plot summary at that. The U.S.A. trilogy was going to be a hard act to follow for any book also written by a man named John during the 1930s. Not because I was so impressed by it, but because I was so tired out by it. And boy, was Appointment in Samarra the breath of fresh air that I needed. It's an actual story with a plot and distinct characters to get to know as they come in and out of the story: Julian who isn't a bad guy overall but is reckless and has bad judgment; his wife Caroline, beautiful and sort of adrift; the Flieglers, who are going to be alright; Al Grecco, skeezy mob tough guy because yes the mob has a presence in this book. The setting is very specific and vibrant, too. Gibbsville has a real sense of life and is actually based on the town where O'Hara grew up.

The writing and subject matter also feel really fresh. O'Hara never quite uses the words you expect him to but the prose still flows smoothly. There's a sense of whiplash as the light, funny tone of the beginning crashes into the conclusion, but that's obviously deliberate. The book is also sexy in a way that I did not expect. I don't know why The List can still surprise me when it comes to depictions of sexuality in old books, but here we are. (This book and Tropic of Cancer were published in the same year, for example.) O'Hara's characters, including the women, are people who have sex with each other, who think about sex, and who enjoy it.

As far as the themes of this book go, it's hard to discuss them without getting even more spoilery than I already have. Basically every action has both consequences and a ripple effect of outcomes through more lives than just the person who took the original action. Something we can all stand to be reminded of.

Long story short, I think this novel is excellent. I think you should read it, and I'm definitely planning to read more of O'Hara's work.

He stood at the table, looking down at the handkerchief case and stud box, and was afraid. Upstairs was a girl who was a person. That he loved her seemed unimportant compared to what she was. He only loved her, which really made him a lot less than a friend or an acquaintance. Other people saw her and talked to her when she was herself, her great, important self. It was wrong, this idea that you know someone better because you have shared a bed and a bathroom with her. He knew, and not another human being knew, that she cried "I" or "high" in moments of great ecstasy. He knew, he alone knew her when she let herself go, when she herself was not sure whether she was wildly gay or wildly sad, but one and the other. But that did not mean that he knew her. Far from it. It only meant that he was closer to her when he was close, but (and this was the first time the thought had come to him) maybe farther away than anyone else when he was not close. It certainly looked that way now. "Oh, I'm a son of a bitch," he said.

When Caroline Walker fell in love with Julian English she was a little tired of him. That was in the summer of 1926, one of the most unimportant years in the history of the United States, and the year in which Caroline Walker was sure her life had reached a pinnacle of uselessness. She was four years out of college then, and she was twenty-seven years old, which is as old as anyone ever gets, or at least she thought so at the time. She found herself thinking more and more and less and less of men.