Year Published: 1911
Pages: 350
First Sentence: That old bell, presage of a train, had just sounded through Oxford station; and the undergraduates who were waiting there, gay figures in tweed or flannel, moved to the margin of the platform and gazed idly up the line.
Rating: 2/3 (meh) 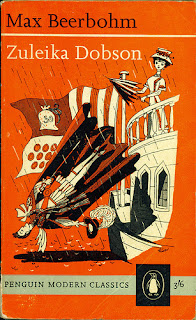 After several days of alternately procrastinating and then forgetting to write this review, the first thing I have to say is that Zuleika Dobson was easily one of the more baffling of the List books that I've read so far.

Max Beerbohm's only novel is about a young lady conjurer who visits her grandfather at Oxford, and inspires all of the undergraduates to commit suicide as tribute to her. There isn't a lot more to the plot than that. The young lady in question is the one whose name appears in the title (Zu-lee-ka, by the way, not Zu-ly-ka or Zu-lay-ka), and her main suitor is the Duke of Dorset, dandiest of dandies, who is the first to decide that the grandest gesture he can make for Zuleika is to give up his life for her. The two of them argue about whether they love each other, and also there is a weird thing about how her pearl earrings and his pearl cufflinks change colour to match the way they feel about one another.

The novel is undeniably satirical, but the fact is that for the most part I didn't get the joke. It felt very, very broad sometimes, and mostly I just couldn't figure out what exactly Beerbohm was making fun of. Also, I read this as an ebook from Project Gutenberg, and I had to look up an absurd number of the words. I always wonder how people end up with these kinds of vocabularies. Beerbohm name drops himself in the novel at one point, and also his narrator takes on some interesting characteristics, and here's why I'm struggling to come up with literally anything whatsoever to say about this book: it wasn't for me.

This is a book for people who know a lot about Literature, and also a lot about Oxford, and probably also a lot about early 20th century Oxford before so many of the undergraduates who absurdly commit suicide in this book ended up dying much more tragically in a much more real conflict. As such, this strikes me as more of an absurdity than a great book.

"...But I had no definite scheme. I wanted to be with you and I came to you. It seems years ago, now! How my heart beat as I waited on the doorstep! 'Is his Grace at home?' 'I don't know. I'll inquire. What name shall I say?' I saw in the girl's eyes that she, too, loved you. Have YOU seen that?"
"I have never looked at her," said the Duke.
"No wonder, then, that she loves you," sighed Zuleika. "She read my secret at a glance. Women who love the same man have a kind of bitter freemasonry. We resented each other. She envied me my beauty, my dress. I envied the little fool her privilege of being always near to you."

The Duke was not one of those Englishmen who fling, or care to hear flung, cheap sneers at America. Whenever any one in his presence said that America was not large in area, he would firmly maintain that is was. He held, too, in his enlightened way, that Americans have a perfect right to exist. But he did often find himself wishing Mr. Rhodes had not enabled them to exercise that right at Oxford.