Uncomfortable Plot Summary: You can't believe everything you read in the paper.

Year Published: 1938
Pages: 308
First Sentence: While still a young man, John Courteney Boot had, as his publisher proclaimed, 'achieved an assured and enviable position in contemporary letters'.
Rating: 3/3 (read it!) 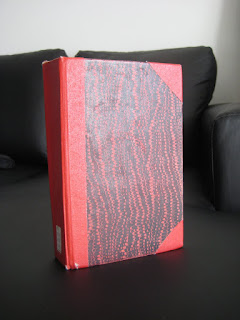 My word association for "scoop" has everything to do with ice cream, so although it makes sense that the book is in fact about reporters, that came as a bit of a surprise to me initially. Our lead reporter/main character is a young man by the name of Boot, who is sent to a fictional African country called Ishmaelia to cover the civil war supposedly breaking out there, for his paper, The Brute. When, after a several-weeks-long ordeal, Boot finally arrives in Ishmaelia's capital, Jacksonburg, he finds a lot of other reporters there but not much going on. Meanwhile, he is continuously receiving telegrams from his paper requesting news stories. While his colleagues send various fabrications to their own papers, Boot dawdles and makes eyes at a young woman named Kätchen.

The novel satirizes the sensational foreign correspondent journalism of the 1930s, so while it's not entirely relevant in today's globalized and hyper-connected world, its points are still sharp and it's a very entertaining read regardless. It maybe needs that relevance to really justify its presence on The List, but frankly after the last few books I've had to slog through I care more about entertainment value than deserving.

I should caution, before I go too much further, though, that this isn't exactly the most racially sensitive book out there. I hesitate to comment on matters of race most of the time because it's not something that I know enough about or am finely enough attuned to in order to be able to do so without looking like a tool. In this case, though, if I'm going to recommend the book I have to at least acknowledge that it's far from perfect in this respect. Here it seems to me as if the people of Ishmaelia are generally sort of indifferent to the European reporters and would rather just be left alone, which is all fine, however a lot of the finer/more specific details fall closer to or over the line. The book is generally poking fun at everybody, but it's a different kind of "fun" in some cases. It's no Lord Jim or anything, anyway (I mean that in a good way, although I apparently completely left any discussion of race out of that particular review).

Moving on, all of the characters were great. Boot's family, in particular, dealt with most near the end of the book, are just pure gold. The writing is generally solid and even superb in places, in the sense that really comedic writing is extremely difficult to do, but Waugh succeeds (again, that bit with Boot's family is genius). He uses the Hemingway trick of not telling you how anyone is feeling, but keeps his vocabulary large, to good effect. I can't confirm this, but I feel like there are echoes of this version of Waugh in Terry Pratchett's writing, both in terms of rhythm and presentation (Pratchett novels, however, tend to have a bit more intricacy in their plotting).

The sole stationary objects were a chrys-elephantine effigy of Lord Copper in coronation robes, rising above the throng, on a polygonal malachite pedestal, and a concierge, also more than life size, who sat in a plate glass enclosure, like a fish in an aquarium, and gazed at the agitated multitude with fishy, supercilious eyes. Under his immediate care were a dozen page boys in sky blue uniforms, who between errands pinched one another furtively on a long bench. Medals of more battles than were ever fought by human arms or on earthly fields glittered on the porter's chest.