Year Published: 1945
Pages: 95
First Sentence: Mr. Jones, of the Manor Farm, had locked the hen-houses for the night, but was too drunk to remember to shut the pop-holes.
Rating: 3/3 (read it!) 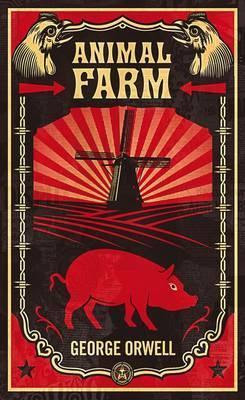 Review:
Animal Farm is another book like Lord of the Flies which I'm not sure how I managed to avoid for so long. It's so short! I could've read this any time! Why did I wait so long!?

The truth is, though, that while I'm happy to have finally read George Orwell's first really famous book/critique of Stalinism, and I enjoyed the reading, I now feel like I need to read five or ten additional works in order to understand how I feel about this short novel. Amusingly, I've just discovered that it won a retrospective Hugo Award in 1996 for Best Novella, so I guess that's what I should call it. Whatever. Here's the beginning of my reading list to prepare for rereading Animal Farm with more context in a few years:

Because here's the thing: originally, this book was subtitled "A Fairy Story," and that's apt. For those even tardier to the party than me, it's an allegorical story about a farm where the animals rebel against the farmer and drive him away so that they can run it themselves. Things start off ok and everyone seems to have good intentions, until the pigs (the smartest animals) begin to assume power over the other animals. This is not subtle but does illustrate the importance of an educated population. In fact I think the whole book can be boiled down to a lack of subtlety but a very effective illustration of its points. Orwell is so good at the illustrations, too. The language is all very simple but he manages to control the tone so well from early optimism to later dread.

The problem is that there's just not enough here for me to draw any conclusions of my own. I've long believed for various reasons that Communism is one of those systems that looks great on paper but suffers from the fact that human beings aren't perfect frictionless spheres in their interactions. This seems to have been illustrated wherever communism has been tried. And I think that a lot of what Orwell is describing in this book is about that sort of thing, but I also know that Orwell was a democratic socialist because that's just a fact I have stored in my brain for some reason, and so I don't know exactly what he's driving at.