67. Heart of Darkness by Joseph Conrad

Year Published: 1899
Pages: 124
First Sentence: The Nellie, a cruising yawl, swung to her anchor without a flutter of the sails, and was at rest.
Rating: 2/3 (meh) 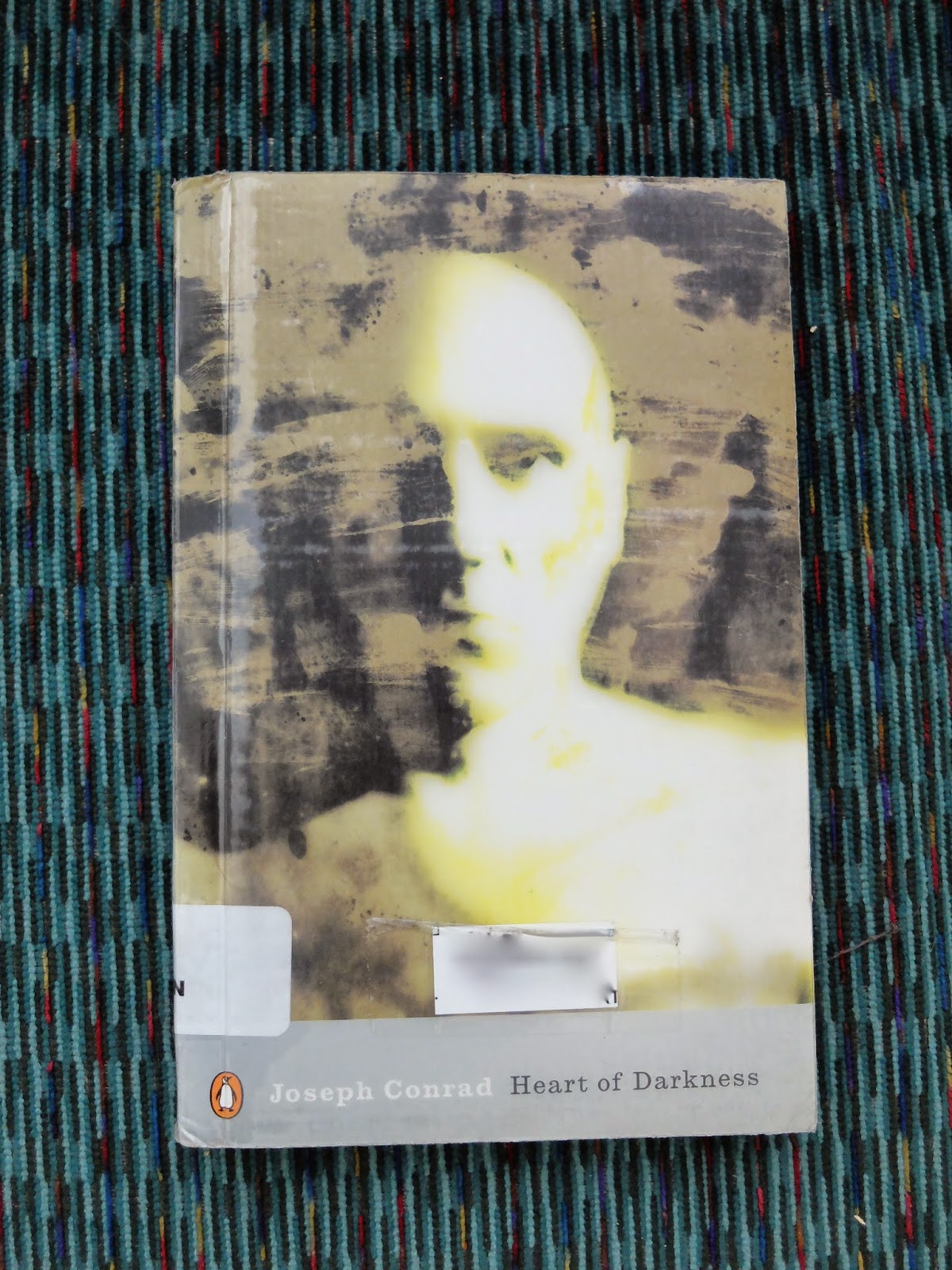 Review:
I'm just going to say right off the bat that I don't think I got this one, and I'm not sure whether I was going to.  Maybe there was just too much in it that was too specific to its time (and while we're on the topic of time, Heart of Darkness wasn't published during the 20th century no matter how you slice it, making its presence on The List another irritating Board indulgence), but I think a lot of what happened in it was just too subtle for me to be aware of.

That's partly my own fault.  The edition I read came with an introduction over thirty pages long that I didn't read in order to avoid what would almost certainly be a ton of spoilers, though I may revisit it if I don't have to return the book to the library too soon*.  Not only that, it had copious endnotes that I also mostly didn't read, so as not to disrupt the flow of the narrative overmuch.  Finally, this edition included The Congo Diary plus notes on that, which I did read and found somewhat illuminating.

Again I'm left mainly with the impression that Joseph Conrad was a remarkable man.  I didn't know when I read Lord Jim that English wasn't his first language, but the fact that the man had a million adventures, along with learning several languages, and then went on to write a slew of modern classics in one of his non-native languages is just crazy.  I think it's the grimness of his two novels that I've read so far that leave me less interested in him than I was in Jack London, a slightly less remarkable and yet more fascinating and exuberant writer-adventurer character.

To return more specifically to Heart of Darkness, though, it's about a man named Marlow who goes to the (Belgian?!) Congo to take a steamboat down the river and bring back a man named Kurtz.  Here already I'm confused, because my initial impression while reading was that Marlowe was going to the Congo to just drive this steamboat back and forth numerous times without Kurtz as his objective, or any objective at all besides killing some time.  Anyway, this journey to find Kurtz is clearly a symbolic journey for Marlowe as well, but what he finds when he finds Kurtz was a little hard to follow.  Certainly some scary jungle savages and a troubled man, but...

I'm afraid trailing off is about all I can do there.  I suppose Marlowe is forced to see the darkness in himself, but when it comes to what actually happens in the novel and not the symbolism, I found it all a bit baffling.  Certainly some of Conrad's obfuscation is purposeful, but some of it was also due to it being 1899, which just makes things extra confusing.  I don't know what was being inferred about Kurtz and his actions half of the time.

Conrad's prose is mostly excellent and evocative, at least, but he does really hammer on the "heart of darkness" phrase at the climax of the novel, which he maybe shouldn't have (although that might have been something else that I just didn't understand).  I've talked before about how little I know about Africa in general, and I'm left somewhat confused as to the actual geography of this Congo journey of Marlowe's, given that I picture the entirety of the African continent as a savannah and/or desert and/or Madagascar, and have done nowhere near enough to remedy that.  So I had to rely purely on what Conrad said about the lay of the land, and the setting was powerful even though I can't vouch for whether it was accurate or not.

Overall, I have to say that this book didn't blow my mind, hence its meh rating.  But then again it's a super short, quick read that I might even pick up again because of that fact, to possibly decipher a bit more of it.

* I didn't. I save introductions till the end because of their inevitable spoilers when it comes to literary works, but then by the time I'm done the book I usually just want to start something new instead of reading about what I just finished reading.

"Avoid irritation more than exposure to the sun..."

I remembered the old doctor,—"It would be interesting for science to watch the mental changes of individuals, on the spot." I felt I was becoming scientifically interesting.

Restraint! What possible restraint? Was it superstition, disgust, patience, fear—or some kind of primitive honour? No fear can stand up to hunger, no patience can wear it out, disgust simply does not exist where hunger is; and as to superstition, beliefs, and what you may call principles, they are less than chaff in a breeze. Don't you know the devilry of lingering starvation, its exasperating torment, its black thoughts, its sombre and brooding ferocity? Well, I do. It takes a man all his inborn strength to fight hunger properly. It's really easier to face bereavement, dishonour, and the perdition of one's soul—than this kind of prolonged hunger. Sad, but true. And these chaps too had no earthly reason for any kind of scruple. Restraint! I would just as soon have expected restraint from a hyena prowling amongst the corpses of a battlefield.