Pairing: Librarian and bear
First Sentence: In the winter, she lived like a mole, buried deep in her office, digging among maps and manuscripts.
Climax: When she came, she whimpered, and the bear licked away her tears. 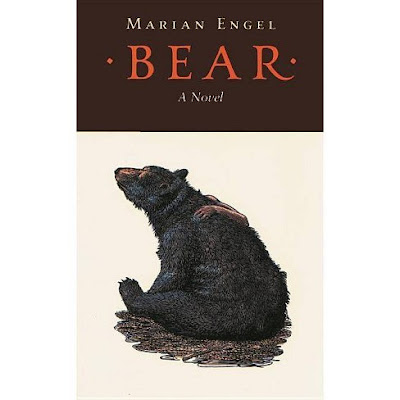 Review:
It will surprise precisely no one to learn that I first heard about Marian Engel's Bear via a CBC Radio program. Having delved just a tiny bit further into my national literature since then, I've discovered that this is the most notorious novel in all of CanLit, being that it's the novel in which a woman has sex with a bear, and it won the 1976 Governor General's Literary Award. (By the way, it shares the latter distinction with another book I've reviewed, The Tin Flute.)

Of course I had to add Bear to my list of things to look at for this blog. It wasn't possible to resist. Sort of like how it wasn't possible for the main character of this book to resist having sexual relations with a bear(?!).

Oddly enough, after reading this book I feel more rather than less inclined to take it seriously. This is the danger of CanLit. So first let's go through the whole thing, because I feel like a lot of what's going on here gets totally missed in the "she fucks a bear" fervour.

Lou is a librarian at the Historical Institute in Toronto, where she seems to work alone save for her boss, the Director (this man is never named, as far as I know). After the Cary estate is settled (the last Cary left the whole thing to the Institute), Lou heads up to Cary's Island in northern Ontario, to catalogue the library. She leaves on May 15, with a car full of folders, paper, a typewriter, and old camping gear.

She travels to a little marina/general store operation run by a man named Homer Campbell, who lives there with his wife and kids, and who helps Lou with a boat and getting her stuff out to Cary's Island. The house is a Fowler's octagon, a thing I'd actually heard of before because Catherine Parr Traill lived in one called Wolf Tower for about a year. Anyway, there's no electricity or much in the way of indoor plumbing in the Cary house. There are hardly any neighbours to speak of.

And there's a bear.

The Carys have always kept a bear for some reason. It's got a shed that it's chained up in, and dog food to feed it. It's quite an old, sedate bear. Famous last words: "She wondered if the bear would be good company."

Lou enjoys her solitude and slow explorations of the house, its surroundings, and its library. She speaks a bit more with Homer, who takes an interest in making sure she doesn't drown or starve to death out on the island. He reminds her that the bear is a wild animal and she should be careful with it. The library isn't terribly remarkable. It includes strange scraps of paper throughout, with bear facts scribbled on them.

One morning, Lou meets Mrs. Leroy, who seems to have some kinship with the bear. In the book, Mrs. Leroy is described as an "old Indian woman," which in this case means indigenous and that's what I'll call her from now on if necessary. Mrs. Leroy tells Lou that she can get the bear to socialize with her if she poops outside near him, so that he can learn her smell. Lou, who is increasingly fascinated by the bear at this point, takes the advice and also walks around with the bear, using the chain he is usually tied up with as a lead.

Homer visits and suggests that Lou could pick raspberries and mushrooms, and plant a garden.

She tells the bear she loves him.

The bugs come out, and make the whole island life a lot less idyllic for Lou, but the bear is pretty indifferent. Homer visits again, and tells Lou the story of the last Colonel Cary who occupied the house. This was a woman who had to be named "Colonel" for some family grudge reason, and she was kind of awesome. She was indifferent to the bear, but kept him for the sake of tradition.

Finally, one night after a long solitary period during which Lou thinks a lot about her life, her job, and her settler ancestors, she gets really worked up over one of Trelawny's memoirs of Byron and Shelley. The bear is lying in the library by the fire. At this point, she reveals that she has been having sex with the Director, weekly, at work, for quite some time. She takes off her clothes and begins to masturbate. The bear takes note, and comes to lick her, until she climaxes. (This is about two thirds of the way through the novel.)

The next day, she goes to Homer's store, where she responds to some mail, then goes back out to the island to fish. She doesn't want to eat the fish, so she gives it to the bear. She spends more time alone with the bear.

Lou goes down to the basement to see what the Carys have left down there, and finds that it's full of trunks. She goes back to Homer's to ask him to help her get the trunks upstairs, and when he's done helping, she tries on some of the last Colonel's old dresses. At this point, Homer starts hitting on her, and it's super uncomfortable and there's this vibe where she knows that he might rape her, but at the same time things are pretty casual. This is the most harrowing moment in the novel.

She continues encouraging the bear to ... I don't even know how to describe it neutrally. Make her orgasm? She anthropomorphizes him. She tells herself that she knows that she loves him. He never becomes aroused throughout all of this. She tries to mount him but nothing happens except that she feels as if she's crossed a line.

She has been trying not to visit Homer's store, but one day she goes to see him, and they share a drink and then they have sex.

Lou lingers on Cary's Island until after Labour Day. The bear finally gets an erection, and when Lou tries to assume the position in front of him, he scrapes her back with his claws. This scares Lou, but the two of them reconcile over the ensuing days.

Mrs. Leroy's son comes to get the bear so she can see him before she dies, because she's old and sick. Lou cleans up the house and leaves, taking a couple of the more valuable books to keep for herself.

And that's the whole book. So, like I said at the beginning, reading it forced me to take it a lot more seriously than the WOMAN HAS SEX WITH BEAR histrionics had led me to expect. First of all, Marian Engel is an extremely skilled writer. Her descriptions of the natural world in this novel are excellent. She has an excellent handle on her main character, Lou, a better one than Lou has on herself. The point of view is Canadian in a weird way. I could easily picture everything in this novel, from Homer's store, to the Cary house, to the slow river that surrounds it, to the bear's tongue. Unfortunately, regarding the latter.

That's on purpose, though! There's a palpable sense of unease that permeates everything that happens in this book, especially the scenes involving Lou and the bear. This book is not supposed to be comfortable for the reader. And it's not. The bear stuff is truly gross.

There's a secondary conflict in this book between settlers and the natural world, which defeated many of them. The original Colonel Cary had to leave his wife behind in York/Toronto because she wouldn't go any further into the wilderness. There's an implication that only some can survive, and that those who do are the ones who can allow their identity to be subsumed by their surroundings.

The primary conflict, though, is within Lou. We're given to understand that she's not a young woman, but not an old one, either. She's someone who has lost hold of her agency and her life, and struggles to figure out her reason for being. In her work at the Institute she buries herself in what other people have left behind. I briefly glanced at a few reviews of this book, and some of the few people who are able to get past the bear sex stuff saw this as a narrative of empowerment. I don't agree with that reading. To me, Lou is struggling throughout the book to find herself and her reason for being, and too often she turns to external validation: from the Director, from Homer, and from this bear. She's physically transformed at the end of the novel: the bear's scratch on her back will leave a scar, she's lost weight after a summer of much harder living than she'd been used to in the city. But I'm not sure that she's transformed within. She's still lonely.

I can't bring myself to recommend this novel. In spite of everything else I've said, I think it's just too weird and uncomfortable for me to go that far. I'll definitely be reading more of Engel's non-bear-related work, though.

A house like this, she thought, in these regions was an absurdity, too hard to heat, no matter how much its phrenological designer thought it good for the brain. To build such a place in the north, among log houses and sturdy square farmhouses, was colonial pretentiousness. She shivered as she thought of the open stairwell in howling winter. When he sold these plans, Fowler had recommended a construction of a homemade stucco that turned out to be as durable as flypaper. He was the sort of American we are all warned about.