26. The Wings of the Dove by Henry James

Year Published: 1902
Pages: 487
First Sentence: She waited, Kate Croy, for her father to come in, but he kept her unconscionably, and there were moments at which she showed herself, in the glass over the mantel, a face positively pale with the irritation that had brought her to the point of going away without sight of him.
Rating: 3/3 (read it!) 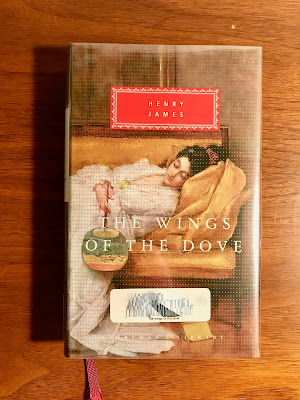 Review:
Let's not beat around the bush. I enjoyed The Wings of the Dove far better than Henry James's other two books on The List, The Golden Bowl and The Ambassadors. This felt very much like a return to what I expect of his form, i.e. walls of descriptive text and characters giving each other meaningful looks in various European locales (chiefly London and Venice in this case). I can stop doubting everything that I thought I knew about my feelings on James's work.

The Wings of the Dove is the story of three young people and their various hangers-on. Kate Croy is a young Englishwoman whose father has shamed their family. Merton Densher is an attractive young Englishman who works for a newspaper. Milly Theale is a young American girl whose family has all died, leaving her with an enormous fortune. Kate Croy and Merton Densher are in love, but are in financial straits such that they aren't able to marry with any hope of staying in the society that they're both accustomed to, and thus they keep their engagement secret in hopes of figuring out a solution to their problem.

Enter Milly, who meets Densher in America while he's there writing dispatches or some such thing for his newspaper, and develops a bit of a crush on him. Milly first encounters Kate upon arriving in London, and the two of them become friends. Not good enough friends for Kate to mention the man she loves, but good enough for Milly to reveal to Kate that she is dying of some undefined malady.

It's at this point that things get interesting (about halfway through a tremendously long book, if you're keeping track), because Kate proposes to Densher that he seduce Milly in hopes that he might marry her and inherit her money, for his and Kate's future use.

After my previous James List books, I took the unusual precaution of reading the introduction to the edition of this book that I got from the library, which was written by someone named Grey Gowrie who I have never heard of before. Anyway, I was prepared to be spoiled by the introduction if it meant that it might illuminate things to the point that I could actually understand what on earth was actually happening in the book. I can't say how much that action may or may not have helped, but like I said, I quite enjoyed this book, so I'll give Grey Gowrie a pat on the back regardless. (I'm not sure the 3/3 is quite deserved, and will once again lament my previous decision not to introduce a 2.5 rating.)

The introduction did reveal a few plot points, but a big part of this book is the journey, and that's impossible to spoil. That is to say, I was as much on the edge of my seat as it's possible to be reading an extremely dense century-old novel. How could Kate dare to propose such a thing to the man she loves? How could he possibly react? Would Milly suddenly get well and throw the whole plan into chaos? What might happen next?! It's rare that a book like this can sustain that level of tension.

As usual, the characters are all excellent. Poor doomed little rich girl Milly is described with so many superlatives in the book already that I couldn't presume to add any. I absolutely believed in Densher and Kate's romance and the sexual chemistry between them, and I'm frankly shocked at how good James was at depicting it. All of this in the kind of prose you might expect from a glacier.

I must say, reading three Henry James novels in one year is a marathon I never plan to repeat. Doubtless I would have liked this novel better if I weren't already exhausted from the previous two.

She tried to be sad so as not to be angry, but it made her angry that she couldn't be sad.

He gave her a long look, and whatever else people who wouldn't let her alone might have wished, for her advancement, his long looks were the thing in the world she could never have enough of. What she felt was that, whatever might happen, she must keep them, must make them most completely her possession; and it was already strange enough that she reasoned, or at all events began to act, as if she might work them in with other and alien things, privately cherish them and yet, as regards the rigour of it, pay no price.

This was her own way of describing a face that, thanks doubtless to rather too much forehead, too much nose and too much mouth, together with too little mere conventional colour and conventional line, was expressive, irregular, exquisite, both for speech and for silence. When Milly smiled it was a public event—when she didn't it was a chapter of history.