Saskatchewan is A Thing: The Magicians 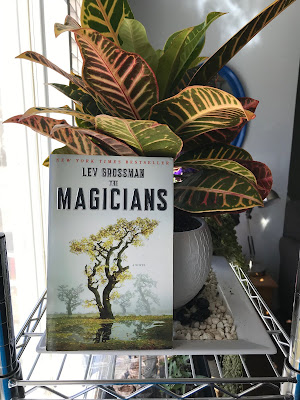 I have to admit, sometimes I'm stretching a bit when it comes to my Saskatchereferences. Generally in order to for me to consider something a Saskatchereference, it has to be a case where the province is showing up in a place where a lot of other places could easily be substituted, but the author or creator has chosen Saskatchewan for no obvious reason. So if it's in someone's memoir about their cross-Canada canoe trip, that's not a Saskatchereference, but if it's being used in a science fiction novel as a comparison for an empty landscape on another planet or something, that qualifies.

I've written about Lev Grossman's The Magicians sort of tangentially over the years, principally in my review of The Magician King way back in 2012. What I have not mentioned before is that The Magicians has an honest to God, bona fide Saskatchereference in it, and it's super sloppy but also kind of accurate? 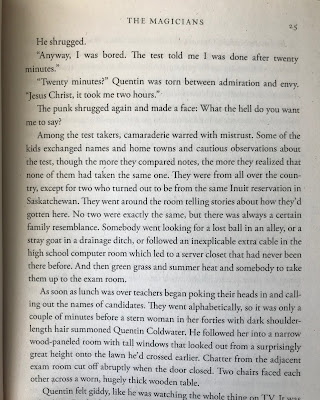 Among the test takers, camaraderie warred with mistrust. Some of the kids exchanged names and home towns and cautious observations about the test, though the more they compared notes, the more they realized that none of them had taken the same one. They were from all over the country, except for two who turned out to be from the same Inuit reservation in Saskatchewan.

The sloppy part: I have seriously considered writing to the author or publisher about this, but there is not now and has never been previously an "Inuit reservation" in Saskatchewan. The Inuit people in Canada occupy four regions known as the Inuit Nunangat. These regions are located in the Northwest Territories, Nunavut, Quebec, and Newfoundland and Labrador. Inuit are Arctic people and while Saskatchewan does have an oft-forgotten northern region, there were and still are different indigenous groups there. It is a very different landscape from the far north where the Inuit live. Of course this is a throwaway comment by the author, but it jumped out at me as being so obviously wrong that I couldn't believe it made it through the whole publishing process.

The accurate part: It's pretty funny that such an erroneous statement could contain so much truth but for some reason, you will absolutely find another person from Saskatchewan pretty much anywhere you go on the planet. Part of it is that people in Saskatchewan like to leave Saskatchewan, and are therefore scattered all over the place. When I travelled to Europe and took a bus tour in 2009, I was travelling with Americans, Australians, South Africans, Mexicans, Kiwis, ... and one other woman from the same city in Saskatchewan as me, who had mutual friends with me.

Email ThisBlogThis!Share to TwitterShare to FacebookShare to Pinterest
Labels: : Saskatchewan is A Thing, Author: Grossman (Lev)