Year Published: 1900
Pages: 499
First Sentence: When Caroline Meeber boarded the afternoon train for Chicago her total outfit consisted of a small trunk, which was checked in the baggage car, a cheap imitation alligator skin satchel holding some minor details of the toilet, a small lunch in a paper box and a yellow leather snap purse, containing her ticket, a scrap of paper with her sister's address in Van Buren Street, and four dollars in money.
Rating: 3/3 (read it!) 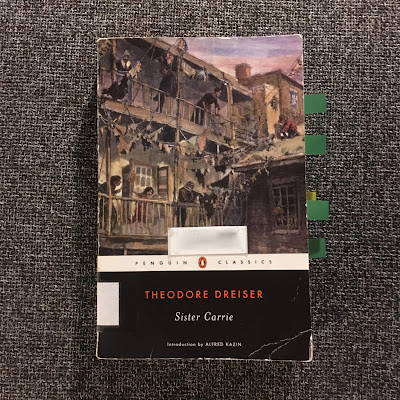 
When a girl leaves her home at eighteen, she does one of two things. Either she falls into saving hands and becomes better, or she rapidly assumes the cosmopolitan standard of virtue and becomes worse.

Theodore Dreiser leaves it up to the reader to determine which of these two things transpire for Carrie.

The year is 1889 when we find Carrie embarking on her journey to Chicago, and the book tells the story of the next ten years of her life. She begins living with her sister, who is married with a baby and lives a life of basic drudgery. Carrie finds a job doing I literally can't remember what involving leather and hours at a sewing machine, because it's the 1880s and the conditions are comparable to what you'd still find today in a sweat shop. Unfortunately she loses this job after a protracted illness and when she gets well her sister's husband threatens to send her back to her hometown if she doesn't find a new job right away. This doesn't seem likely, but fortunately she encounters a young salesman, Charles Drouet, who she met on the train in to the city, and he buys her lunch and then immediately convinces her to move in with him.

Drouet is a fascinating character. He's warm and caring but also he's a travelling salesman who is not particularly faithful to Carrie. She, even at 18, evidently knows that the two of them aren't on the same level intellectually or emotionally but things go along nicely until Drouet introduces Carrie to the manager of a "resort" he frequents, Hannah and Hogg's. (I don't really understand what "resort" means in this context, but I think probably it's somewhere between an English gentlemen's club and a bar?) This manager is a man named George Hurstwood and he is the worst. Drouet is comfortably well-off but Hurstwood is closer to wealthy, which he likes to show off. He has a wife he doesn't like much and a couple of kids who don't think much of him, and pretty soon he decides that he wants Carrie. He starts moving in on her while Drouet is away and convinces her that the two of them should be together.

I'll quit the summary there except to say that Carrie appears in some amateur theatrical production presented by Drouet's Elks hall and discovers that she loves acting, and is very good at it, and there's the stage set for the rest of the novel.

I haven't said much about Carrie herself because she's an amazingly passive character to be at the centre of such an entertaining novel. She only takes action on her own two or three times in the whole book, and then when she has practically no other choice. But I liked her a lot. I liked mostly everyone except Hurstwood, who, as I said, is the worst. Dreiser is very good at character, and Hurstwood is so well-written, that he annoyed me more than anyone since, well, I guess Alex Portnoy in Portnoy's Complaint (I just went through The List to check this, ha!).

Dreiser's a bit long-winded but his chapters are short (and they have titles which, to my dismay, the edition of the book that I read did not include) so the book flew by. It's not profound thematically, but it's a bit more complex than what I quoted at the beginning. There are some issues: Carrie seems to spring into existence on the train and has no connection at all to her family (this is not exactly unrealistic though); Carrie never gets pregnant; Dreiser has shitty opinions about things like suicide and women's affinity for clothes (i.e. women be shoppin). You kind of just have to accept these things and enjoy the story. I certainly did.

How true it is that words are but vague shadows of the volumes we mean. Little audible links they are, chaining together great audible feelings and purposes.

We do not make sufficient allowance for the natural elements in our philosophy. Our logic is bare of the voice of the wind. How potent is the answer a pang of hunger makes to the cry, "Be good." How subtle is the influence of a dreary atmosphere.

Lastly, let all men remember that in the main, the world's virtue has never been tested. Wherefore was he good—the heavens rained goodness on the soil that nourished him. Where severe tests have been made, there have been some lamentable failures. Too often we move along ignoring the fact of our own advantages in every criticism we make concerning others. We do this because we are ignorant of the subtleties of life. Be sure that the vileness which you attribute to some object is a mirage. It is a sky illumination of your own lack of understanding—the confusion of your own soul.