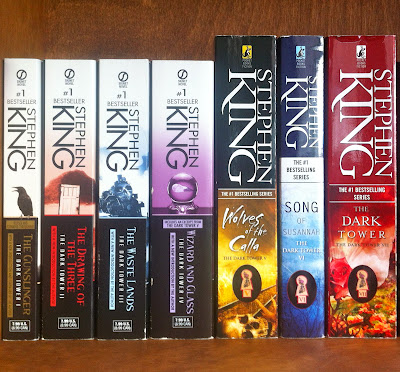 I wrote a little bit about the Dark Tower movie quite some time ago now, and I think I’ve at least thought of posting in response to various different announcements (the Wizard and Glass show announcement in particular), but just haven’t gotten around to it.

However, I’ve now been asked about the series a couple of times, as people in my book club are just starting it or are reading it in preparation for the movie, and so I thought I’d write my own Dark Tower primer post which avoids spoilers more than the other stuff that I’ve written about the series, aimed at addressing questions like, “should you read the books?” and “should you see the movie?”  If you want to read something that is substantially more than a primer, I will point you toward Stephen King’s The Dark Tower: The Complete Concordance by Robin Furth. This is a six hundred page reference book about the series that will probably end up on my bookshelf eventually, but which I haven’t read yet.

Here’s a reminder that when I reviewed the overall series I ranked the books thus, from best to worst: My complete Dark Tower (re)read is now four years behind me, but if forced I would probably place The Wind Through the Keyhole (Book 4.5) on that ranked list between Wizard and Glass and Song of Susannah, not because it was bad, but because it wasn’t very memorable.  The Little Sisters of Eluria (Book 0.5, more of a novella) would go just below that, because I remember it being boring but it did have a few very memorable images.

So, I count myself as a Stephen King fan, but I acknowledge that he has some serious faults as a writer and also has written some garbage.  When you write as much as he does, of course not all of it will be good.  I came to the Dark Tower early in my King reading, mostly because I read Firestarter first and I wasn’t into horror yet (I’m not sure whether I even qualify as being “into it” now) so I was too scared to try any of his more famous works.  I don’t know what year it was when I first read The Gunslinger but I’m sure I was in high school, and it made a big impression.  I was already getting sick of epic fantasy, and the Dark Tower series represented something that had that epic feeling and some of those same tropes, but was blessedly different.

What is the Dark Tower series?

The Dark Tower is Stephen King’s magnum opus, but I don’t think I’d call it his masterpiece (I haven’t read enough of his other novels yet to make that call—“only” 24, including the Dark Tower books and three that he co-authored). It is the story of Roland Deschain, the last gunslinger, who is on a journey to the Dark Tower, a destination whose significance is not immediately clear to the reader (and is perhaps a bit of a MacGuffin).  Roland is a towering main character, enigmatic and magnificent. He carries a pair of huge guns that he doesn't hesitate to use. Over the course of the series, he is joined by various characters of varying quality, but his journey to the Tower is paramount. The genre is a mix of western, post-apocalypse, portal fantasy, science fiction, and road novel, with a bit of biblical imagery thrown in for good measure.

It begins with one of the greatest opening lines in the history of literature:

The man in black fled across the desert, and the gunslinger followed.

It's also pretty wacky.  Eventually, the series becomes self-referential to various other works in King’s vast oeuvre, and what started out as the story of a knightly figure, the last of his kind, pursuing a goal over a vast distance of time and space for mysterious reasons, turns into something much more complex. References creep in from other cultural touchstones as well, some more organically than others.

Basically, if you have any expectations whatsoever about the Dark Tower, you should abandon them immediately.

Should you read the Dark Tower series?

Short Answer: The whole series is available for your reading pleasure. If you start with The Gunslinger and stop when you get bored, there'll be no harm done.

It should be evident by now that I'm a big fan of the series, however I hesitate to recommend it without several words of caution.

The first thing to note is that the series is very unlike King's other work. There are King fans who dislike The Dark Tower and others who have only read The Dark Tower. That being said, a passing familiarity with King's work is beneficial but not essential on a hypothetical reader's journey to the Dark Tower. Knowledge of other King works means you might recognize a few more of the references he's making to them as the series progresses. It also might ease your discomfort with some of the weirder places that the series goes if you're already familiar with some of King's favourite themes and writing tics.

Next, know that there are basically two halves of the series, separated by the prequel novel, Wizard and Glass, that comes smack dab in the middle. The Gunslinger is my favourite book in the series partly because King evidently didn't know where he was going (he's what's called a "discovery writer" and doesn't plan ahead of time, which is kind of a problem with a multi-book series) and the cracks don't show yet in the first book. I suspect that King wrote the prequel novel when he did because he had no idea where to go after The Waste Lands, but that's just a theory of mine.

Anyway, the series was begun with a short story in the late 1970s, and Wizard and Glass, the wheel-spinning prequel novel, was published in 1997. The first three books are my favourites. They have a grander feel than the second half of the series, which suffers from the essential task of having to wrap up all the nonsense that the first half could just present without comment.

Also, in 1999, Stephen King was struck by a van while he was out walking, and was very seriously injured and also became extremely motivated to finish The Dark Tower. The last three books were published within one year of each other, which is a feat of epic proportions but the cracks show, and they are large. I would have to reread the series more carefully to confirm this, but I believe that the majority of the self-referenced material appears in these later books, and they set up the meta-narrative themes that become very important at the end of the series.

Overall, I think the series is worth it, but I wouldn't recommend pushing through if the early books don't interest you. It's a series that peaks early, so although I didn't hate the last three books or the ending of the series, I did find them disappointing, and you might as well.

Should you see the Dark Tower movie?

Short Answer: I'm not sure.

First you should watch this trailer.

I have a lot of thoughts about this:


I honestly haven't decided yet whether I'm going to see the movie, but I'm definitely going to wait and see what the reviews are before I go. I don't have a huge amount of faith in the creative team behind this (and when I say "creative team" I mostly mean "screenwriter, Akiva Goldsman"). I'm very jaded about adaptations lately. Also, ever since the Harry Potter movies managed to totally supersede my mental images of the books, I've been hesitant to see adaptations of things I really love.

Given that I'm so unsure about all this, I can hardly recommend that anyone else rush out to see The Dark Tower. On the other hand, if you think that trailer looks awesome, go ahead!

Do you need to read the books before seeing the movie?

Short Answer: Of course not.

Beyond the fact that I have no dog in the book-before-movie fight (or even in the book versus movie fight—I simply don't care anymore), it's hard to say whether a knowledge of the books would be helpful or necessary when the movie hasn't been released yet.

Before I get into the next bit, a warning that you should exercise caution when reading any of the many articles about how The Dark Tower film is actually a sequel to the series (the linked one very clearly identifies spoilers, but be careful anyway!).

The fact that the film is a sequel to the books is something that I find reassuring, I have to admit. If you are confused as to how there can be a sequel to a series that is finished, just trust me and don't think too hard about it. Just know I think this is the best possible route they could've taken to adapt the Dark Tower series. It means that you can't expect the movie to directly follow the events in the books (but also simultaneously need to have read the books to understand why that makes sense).

If they do a halfway competent job with this adaptation, you shouldn't need to have a familiarity with the source material. That is literally the point of an adaptation. That being said, I suspect that having read the series would add an extra layer of enjoyment (or perhaps frustration).