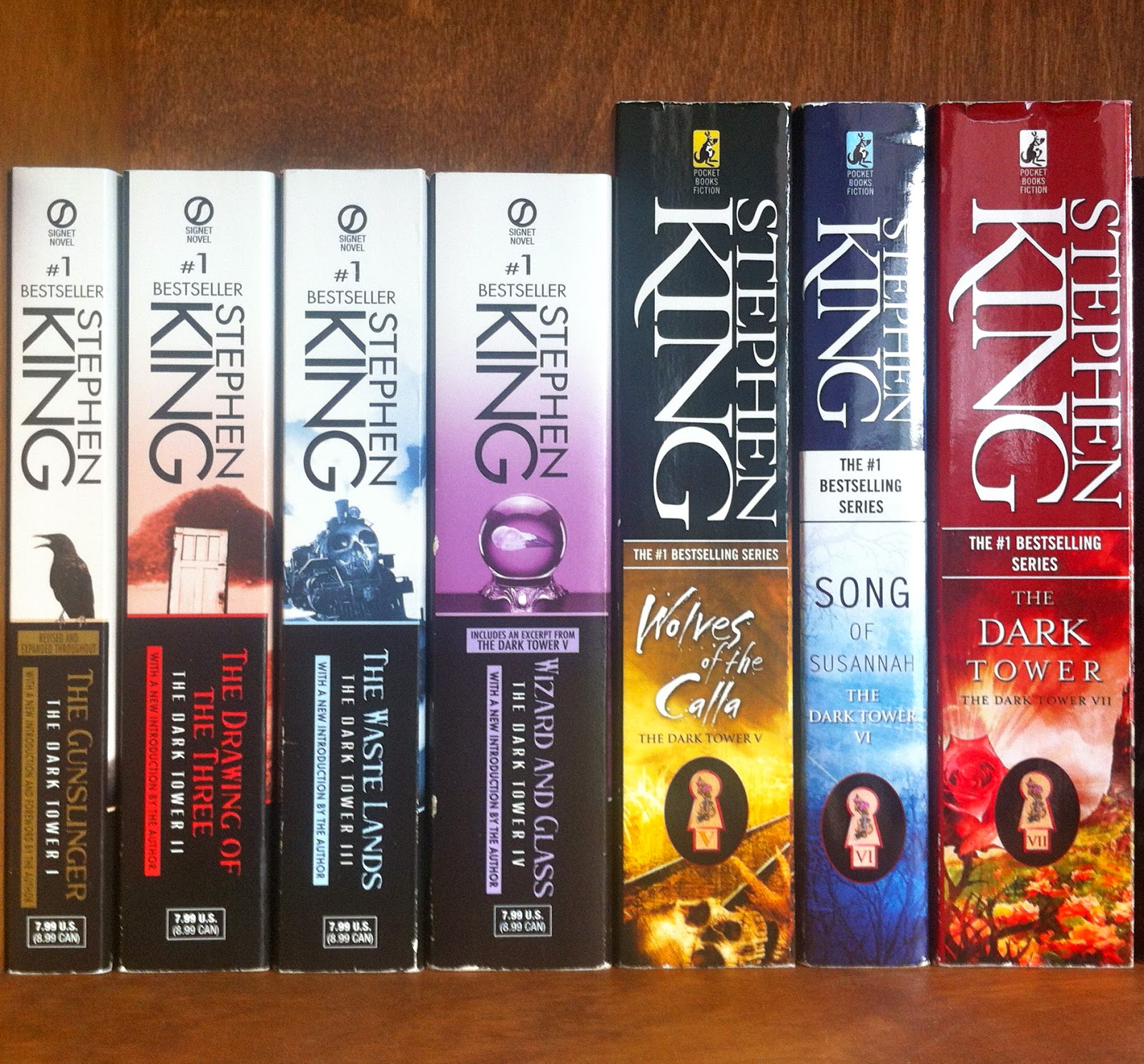 Review:
I'm really going to spoil things now, so you might want to skip this post if the other stuff I've said about The Dark Tower has somehow convinced you to read it despite being hopelessly vague.

Anyway, before I say anything else, I'll say that King did eventually get a bit carried away with made up words (not to mention some colourful dialogue). Ka is fine (and how could it be otherwise?), but when you start getting into dan-tetes and an-tetes and taheen, things start to fall apart.

That's minor, though. More important to my impressions of the series as a whole is the issue I already mentioned in my last post regarding the Gunslinger not ending up where he belonged. King began the series as a very young man and ended it in a rush as an older one who'd very recently had his life flash before his eyes. It's a shame that things had to work out that way, but I'm not even sure the young man could've finished what he started, and I'm not sure the older man ever would have finished at all if not for having his life threatened. Between the conclusion King was able to write and no conclusion at all, I'll take the former.

And now I'll rank the books, if you wouldn't mind. I'll start at the bottom, just like I did with The List.

King isn't exactly great when it comes to race (to be clear: nor am I, so I'm not going to attempt an in depth discussion of this). He has his fair share of magical black men and I'm not sure how to feel about some parts of Bag of Bones. But you've got to give him credit for making one of the main characters of his magnum opus a mentally ill, physically disabled black woman, the titular Susannah. Never mind that the series is lily white otherwise, besides the vampires and low men and creatures with animal heads and human bodies a la Minotaur. Anyway. This book was my least favourite mostly due to the fact that it functions almost solely as place setting for The Dark Tower. Almost nothing of note happens in this book, the characters are mostly just moved into place (literally into the times and spaces where they'll be when The Dark Tower begins).

Except for a hundred thousand voices singing in rough harmony, those were the only sounds.

This would be a controversial spot for this book, if I had enough readers for controversy. It's many people's favourite in the series. I found that the romance between Roland and Susan was overblown and nowhere near as epic as it was supposed to be. The witch Rhea was a standout part of the book though, and child Roland was a wonderful thing to see. I just wish it had been tighter, because I got bored in the middle.

Roland decided he'd had enough tea and hypocrisy for one morning.

This one is above 4 mostly due to the fact that in spite of everything, I was at least never bored. There's more to be found in my review. I didn't cry when Eddie died, but I teared up for Jake and Oy's exits from the series. (I didn't cry for Susan either.) Also: Mordred's a-hungry. King also gives the guy who hit him with a van (and later died under other circumstances) an extremely dubious cameo. I have less of a problem with King's presence in the series than this guy's, who presumably didn't give his permission for it.

Twins and kidnappings and robots, oh my! This book was really energetic compared to 4. I was extremely curious throughout to find out the origin of the Wolves and Roland's plan for dealing with them.

"I do not apologize for my beliefs," he said, "but if I have complicated your work here in the Calla, I'm sorry."
"Your Man Jesus seems to me a bit of a son of a bitch when it comes to women," Roland said. "Was He ever married?"
The corners of Callahan's mouth quirked. "No," he said, "but His girlfriend was a whore."
"Well," Roland said, "that's a start."

2 - The Drawing of the Three

Roland on a beach, dying with a junkie and a crazy lady. This book is basically just building directly on events at the end of The Gunslinger. It's got shooting and drugs in it. Or rather, to be more specific, Roland crosses through into what appears to be our world, to recruit Eddie, a heroin addict, and Odetta/Detta, a divided woman in several ways, to his cause.

This book has all the coolest shit in it. The enormous robot/cyborg bear Shardik, the train, Blaine, who is a pain and also probably the creepiest thing in the entire series. Jake's resurrection through a monster house. Lots of good stuff.

The series peaked early. This is the book where King had the loosest handle on the Gunslinger and the world he was crossing, and consequently it's the best book, unburdened by anything that had come before. It's where he captures the atmosphere most effectively. It's clear that there's more to follow, and the connections with "our" world, which would eventually get King into trouble, are present from the very beginning, but I'd say that this book read alone would make for the most satisfying starting and stopping point.

And that's almost all I have to say about that. Just one final point…

SPOILER!!! for the very end

To briefly address the very end, I don't have any major problems with it. I don't know what King's intention was in sending Roland back to the beginning but the more I think about it, the more symbolic it is of the nature of fiction and imagination itself. Ka is the writer, but it's also his imagination and the function of story. Given a different set of ideas or circumstances, King may have written an entirely different series, one he was more or less satisfied with. Could Roland's story be told perfectly? I don't know.
Posted by M.R. at 10/15/2014 12:00:00 AM