Pairing: College student/new grad and businessman
First Sentence: I scowl with frustration at myself in the mirror.
Climax: I cry out a wordless, passionate plea as I touch the sun and burn, falling around him, falling down, back to a breathless, bright summit on Earth. He slams into me and stops abruptly as he reaches his climax, pulling at my wrists, and sinking gracefully and wordlessly onto me. 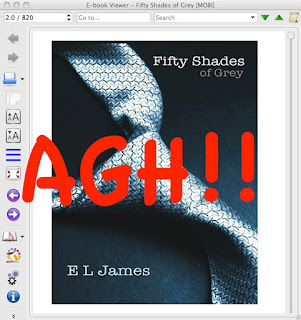 Review:
It's not exactly that I'm all talk about not reviewing romance novels. But when my friend invited me to participate in a semi-literary discussion of Fifty Shades of Grey, it was an opportunity that I just couldn't pass up. Almost all of the other participants in the discussion were English majors who used fancy terms like "the text" instead of "this fucking book," so I got a bit of an inferiority complex about it, but now here I am to post my thoughts on my blog where I get to be the loudest voice in the room.

There are about a million issues with this book that I probably don't have time to get into right now, but we'll go through some of the most glaring ones.

Pretty much every single person in this book is terrible.

Christian is bland and creepy, controlling, all that good stuff. He's apparently so good looking that all the women around him are constantly creaming their jeans, but it seems to me like anyone who actually met him would instantly hate him. He won't let Ana drive her own car, he dictates what she eats, and possibly most egregious of all he actually shows up at the hotel where she's having drinks with her mother across the country. So romantic, amirite ladiez? I really don't know how anyone can find him appealing while reading this book when Ana herself is clearly afraid of him. He's also the mega-rich owner of a huge company but he never does any actual work. How nice for him.

And Ana is just absolutely awful, by the way. She's a college student with approximately two friends who has never been drunk, had sex, or even liked a boy. She does not own a computer. The drinking and sex aren't really the major issue here, I know several people who don't drink or who waited to have sex until they got married. It's more the fact that Ana has no moral objection to either of those things and yet she somehow hasn't done either of them or ever even thought about doing either of them. Not only that, but all the guys in the book are pretty much throwing themselves at her, and it's also pretty much a non-stop drinkfest from page one on. Basically what I'm trying to say is that this is very inconsistent. Virginity, by the way, is an old trope in the romance genre, so old that it has actually fallen out of favour because it's ridiculous, except to E. L. James I guess.

Because the book comes to us through Ana's first-person narration, every other character is filtered through her and Christian is the only one who fares well at all.

Her supposed best friend, Kate, is portrayed probably more variably than any other character I've ever encountered, not just in this book but in any book. Apparently Ana doesn't realize this, but she actually hates her best friend, who she thinks of as a rich whore.

Ana's parents don't come out looking much better. Her mom is a flighty airhead who has been married four times. Her (step)dad is a taciturn and simple fellow. Ana is incredibly condescending to both of them.

And ¡Dios mio! Don't get me started on José, her Mexican stereotype.

To an extent all of the characters are just victims of the writing. 50SoG needed a very firm editorial hand and apparently didn't get it.

Ana thinks the phrase "holy crap" about five hundred thousand times. She also "peeks" at Christian about eight hundred thousand times, and they both say things "dryly" no fewer than a million times. I understand that words will get repeated sometimes, but if it's so often that I start to notice, it's a problem. Not to mention that climax scene I quoted above, where "wordless(ly)" appears twice in as many sentences.

The dialogue is absolutely abysmal in places. At one point Kate says to Ana, "Yeah, took almost a year to have my first orgasm through penetrative sex and here you are... first time?" Penetrative sex?! I appreciate that these kinds of terms are helpful in things like sex advice columns but for casual girl talk between a couple of friends this makes no sense.

The weirdest/worst thing, though, would be all of the Britishisms:
No wait. The actual worst thing is that the D/s contract is reproduced in its entirety within the book. And reappears at least once. I mean I know I'm not a published author or anything, but this is Writing 101 level stuff.

No wait again. The really, truly worst thing about 50SoG is that Ana has an inner goddess and a "subconscious" which are these really bizarre personifications of her libido and her conscience. This is incredibly lazy shorthand for her conflicted feelings, and also just really... annoying.

I suppose this could technically qualify as a subset of my second point, but whatever. I've talked about the difficulty of writing about sex before. I'm not sure if it's actually the hardest thing to write (that distinction probably goes to death), but it's certainly up there.

Not to mention that even really good erotica isn't going to turn everyone on, mainly because different people get off on different things. Still, this erotica wasn't very good. Any sort of flow that it could be said to have was frequently interrupted by Ana's exclamations of "holy cow" or "wow" or what have you. Rhythm is crucial to good erotica, because it allows the reader to forget the absurdity of sentences like "tantalizingly, he slid his cock into her wet pussy."

I touched on this briefly above, but I'm a bit mystified as to how anyone finds Christian alluring when he's this changeable, scary dude. Money, I guess, and looks. Which is disappointing.

Sadly I think the reason so many people are finding a romantic love story in 50SoG is because the book keeps telling them it's a romantic love story. There's a certain amount of mystery in every love story (why this particular person, and not someone else?), but the connection between Ana and Christian seems to be purely a physical one, with some very superficial emotional trappings i.e. he's wounded and she yearns to fix him. Beyond that it's hard to tell if the two of them have anything in common at all. (And how could they have much, when he's a billionaire and she's pretty much living on Kate's charity, as far as I could tell?)

In a shorter book (A Room with a View for example), I'm prepared to accept a certain amount of telling when it comes to how the central pair might feel about one another. But 50SoG has over 500 pages to convince me that Ana and Christian are meant to be together, and it fails.

So, how to wrap this up.

This book is a very clear spiritual successor to Twilight, in that the same things that obviously made Twilight popular are at work here, too. The bad boy who finds the dowdy, bookish girl inexplicably alluring, and changes all his misguided ways just for her is one of the most familiar daydreams of my teenage years. I can't even pretend that I've abandoned it entirely in early adulthood. But these days I'm more interested in finding a person who is stable and who wants to do fun things with me.

I'd like to see women reading better erotica and overall better novels than this, though, without the extremely problematic portrayals of sexual and romantic relationships.
Posted by M.R. at 10/30/2012 09:20:00 AM