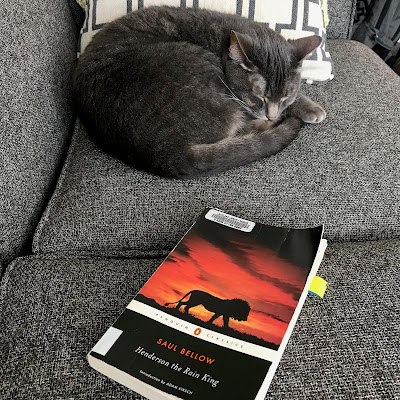 Our rain king is Eugene Henderson, who inherited a fortune, fought in the Second World War, married twice (three fewer times than Bellow himself), raised pigs, and, in this novel, finds himself in Africa. I should note that everything is not necessarily in this order. What made him take the trip? A voice inside him whispering: I want.

Henderson begins travelling with friends but decides he needs to travel to the interior of the continent. He finds a guide, Romilayu, who brings him to the Arnewi, a group that raises cattle. The Arnewi have a problem, which is that the cistern they use to water their cattle is full of frogs. Henderson offers to solve this problem by setting off a bomb inside the cistern to kill the frogs so that they can be easily removed. The Arnewi agree to this plan and within no time he has actually exploded the whole cistern. He flees.

Next, Henderson and Romilayu travel to the territory of the Wariri. This is where the rain king shenanigans come in, as well as the lions that apparently show up on many version of the cover of the novel, including the Penguin edition that I read. However, it's also a third of the way through and that's where I like to end my summaries.

Henderson is an exceptionally well-realized character. He is someone who is wealthy but lacks culture, self-awareness, or the ability to assess the potential consequences of his actions for other people. He's impulsive and thinks very highly of himself. The characters around him are necessarily in the shadow of such a larger than life creation, but many of them are nevertheless well-developed, too, at least in terms of their behaviour, if not their motivations.

The book is also not the white saviour in Africa narrative that I was primed for by the title, thank God. Henderson is the butt of that particular joke. Aside from several unfortunate facts (i.e. the fact that I have to keep referring to "Africa" because the book isn't set in a particular country or territory, not even a fictional one; or the fact that Saul Bellow had never been to Africa when he wrote the book), this is a lot less racist than the premise might lead one to expect, and it's all down to our point of view character being the bit of a dolt that he is.

When I reviewed The Adventures of Augie March, I wrote a lot about how tired I already was of the whiny young white guy narratives of The List. These are a persistent problem, and Henderson the Rain King seems to be a critique of these even as it falls victim to the same problem. Henderson is a whiny older white guy, essentially in midlife crisis mode. He travels to Africa to find something, and it's ridiculous. His vanity causes him nothing but problems. And here's the thing, I feel like I've been mostly talking about this book positively but really it's just so boring. I had a hard time connecting with the blowhard millionaire at the centre of the book and having any interest in his problems. There are a few funny moments, and a few moments of truth, but overall his story didn't interest me.

Saul Bellow has some more pretty famous works but I'm pleased to say that this is his last book on The List and I don't plan to read any more of his work. If, on the other hand, you want to give a pretty decent author a try, I won't stop you this time.

Her large, pure face was the same as ever. It would never be steady, but it was beautiful. Only she had dyed her hair. It was now orange, which was not necessary, and it was parted from the middle of her forehead like the two panels of a curtain. It's the curse of these big beauties sometimes that they are short on taste.

I am a nervous and emotional reader. I hold a book up to my face and it takes only one good sentence to turn my brain into a volcano; I begin thinking of everything at once and a regular lava of thought pours down my sides.

But maybe time was invented so that misery might have an end. So that it shouldn't last forever? There may be something in this. And bliss, just the opposite, is eternal? There is no time in bliss. All the clocks were thrown out of heaven.