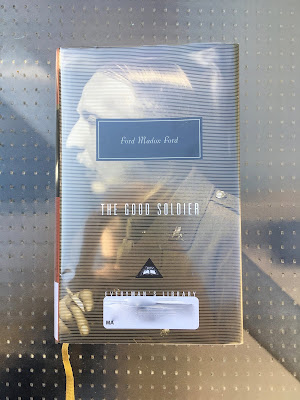 Review:
I was all ready to call this book a "meh" until I went back over the passages I wanted to quote and realize that it was a wonderful ride.

Ford Madox Ford's The Good Soldier was written and set prior to the First World War, and published in 1915, which resulted in a change from its originally intended title, The Saddest Story. It's about as far from his Parade's End quartet in tone, style, and themes as it's possible to be, except of course for the infidelity. What I liked best about it was that I could actually understand what was going on.

(By the way, I don't think this is the saddest story.)

John Dowell narrates the story of the friendship between him and his wife Florence, wealthy Americans, and Mr. and Mrs. Edward and Leonora Ashburn, wealthy English, over a period of nine years or so, beginning in 1904. Florence has what's called "a heart," that is to say a bad one, that has forced the Dowells to remain in Europe after their honeymoon crossing of the Atlantic. John has already been acting more as nursemaid than husband for several years before the two couples meet in Germany. Edward is a soldier, kind of a prototypical wealthy Brit, and Leonora is neurotic, Irish, and Roman Catholic.

Early in the novel it becomes obvious that "friendship" here is a misnomer. Dowell at first implies that this has something to do with the Ashburnhams' closed English manners, but reveals more and more as his story continues. Florence and Edward are dead at the beginning of the story, and one wonders just how the two of them met their ends. I mentioned infidelity a moment ago, and yep, while Edward is the quintessential good old boy, he's also the quintessential serial cheater.

Dowell is a narrator that I found myself doubting even though he seems reasonably trustworthy. He does love to play the innocent. As soon as the story began I wondered just what dark secret he might reveal by the end of the novel. This was somewhat to the book's detriment, because, like I said before about how my rating got bumped up when I went back through it, the real joy here is the journey.

Given all the trouble I had with reading the first two novels of Parade's End, the style here was a total surprise. It's completely different: descriptive and conversational where Parade's End is all impenetrable walls of dialogue, vague allusions, and piles of ellipses. (In fact, I'm very glad that I hadn't read this when I started Parade's End because I would've been even more disappointed in that case. Also: The Good Soldier has been called the best French novel written in English, and prior to my picking it up I was very worried that I might have to just never read a French novel.)

Ford seems to have a genuine affection for most of the characters that he's running through the wringer in this novel. He isn't kind to them, but they all get to be such real people. The character who's treated as the biggest villain is not the character you'd expect at the very beginning.

However! That treatment is telling, and maybe our narrator isn't after all as trustworthy as I suggested before. Maybe I'm an unreliable narrator?!

Thematically things are pretty dark. The novel asks: do we know anyone, even those closest to us, and more importantly, can we trust them? It seems to answer in the negative.

You may well ask why I write. And yet my reasons are quite many. For it is not unusual in human beings who have witnessed the sack of a city or the falling to pieces of a people to desire to set down what they have witnessed for the benefit of unknown heirs or of generations infinitely remote; or, if you please, just to get the sight out of their heads.

Constancy! Isn't that the queer thought? And yet, I must add that poor dear Edward was a great reader—he would pass hours lost in novels of a sentimental type—novels in which typewriter girls married Marquises and governesses Earls. And in his books, as a rule, the course of true love ran as smooth as buttered honey.

She was tall and strikingly thin; she had a tortured mouth, agonized eyes, and a quite extraordinary sense of fun.