First Sentence: Edward—
You must come back to the Lodge. 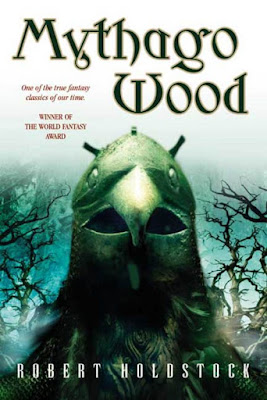 Review:
I first encountered Robert Holdstock's Mythago Wood in its novella form in the really excellent short story collection, The Secret History of Fantasy, edited by Peter S. Beagle (the man, the legend). It's the second last story in that collection. I remember very clearly sitting on my couch reading this story one day and the heater made a noise or something, and I was so startled that I almost dropped the book.

From what I can recall and based on a quick flip through my copy of the collection, the first section of the novel, called "Mythago Wood," is basically the same as the text of the novella. This is a story about Steve Huxley, who returns to his childhood home in England after fighting in the Second World War, and discovers that his older brother has become obsessed with the nearby Ryhope Wood, a forest that their father also studied for many years prior to his death. There's a run on sentence for you. The first part of the novel is mainly about the interactions between the two brothers, and each of their interactions with Ryhope Wood. This is an old growth forest that has interesting energies within it that generate myth images (mythagos) from many different eras of legend. The wood seems to actively work to keep people from entering into its furthest reaches.

This is quite an excellent book, and although I didn't recapture the level of absorption that I had on my first read, there are definitely eerie and atmospheric bits in the book that are really effective. Holdstock is really good at descriptive writing that engages all the senses, even if he sometimes leans too hard on bad smells. But he's right up there with Marilynne Robinson when it comes to leaves and water. Everything that happens in the book, despite being fantastic, feels very grounded in the world the author describes, or in other words it all feels internally consistent somehow despite the fact that it seems almost anything could happen.

My one issue, which ended up being more of a big deal than I would've liked, was with the mythago Guiwenneth. She's a mythic figure from the Bronze Age, who supplies motivation for all of the male characters in the book, and whose portrayal made me a bit uncomfortable, as being someone who just exists for the sake of said male characters. There's a very easy counterargument to this though: that's literally what all of the mythagos are. The people who enter the wood generate the mythagos from their subconscious (this probably seems spoilery but I promise you it comes up early and also this book is way more about the journey than about any specific plot points). So whatever any incarnation of Guiwenneth is, that incarnation was created by the male characters, both according to the myth and according to their own preconceptions about women. Not sure if she could be anything other than a Celtic Princess Dream Girl under those circumstances.

There are only a couple of other female characters in the book and only one of those has a speaking role. However, she's kind of awesome, and both of these two characters demonstrate how the Wood has basically ruined the human relationships of the men who explore it. I'm not sure if that should be applauded or not but whatever. It's a good book, people.

This isn't an exciting adventure fantasy novel. It's a slow burn, atmospheric and thoughtful. I recommend it to fans of House of Leaves who are also fans of Guy Gavriel Kay.