R67. If on a winter's night a traveller by Italo Calvino

First Sentence: You are about to begin reading Italo Calvino's new novel, If on a winter's night a traveler. 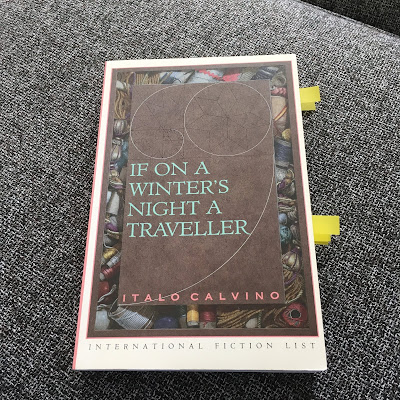 Review:
You are about to begin reading M.R.'s review of Italo Calvino's novel, If on a winter's night a traveller*.

(I will not be able to keep up that conceit, forgive me!)

I hate it when this happens. I'll get it out right up front: I liked this book fine but I think that most of what the author was doing went way over my head. That's extra unfortunate, and the reason why I say I hate it when this happens is that I was really excited to read this book and got my expectations up. Calvino is an author whose work I've never read before, with the exception of this fabulous essay about classics and what exactly they are and why we should read them**. However, If on a winter's night a traveller came highly recommended.

It's a novel about reading on at least two levels and probably a couple more that are entirely beyond me. Half of it is written about the Reader in second-person singular present tense (surely one of the only times I've encountered that outside of Choose Your Own Adventure stories). The Reader—or rather "you"—is/are trying to read Italo Calvino's newest novel, and that struggle makes up the other half of the novel—several aborted attempts to read different texts that keep shifting, beginning, and ending.

There're a fair amount of descriptive passages about the triumphs and trials of reading, which readers tend to really love. I recognize that I'm being pandered to every time this sort of thing comes up (e.g. Of Human Bondage, The Thirteenth Tale), but I still fall for it almost every time. Calvino does a fine job of it here, particularly in an early passage about book shopping. The problem, though, is with his main character, i.e. you, i.e. the Reader, i.e. me. I'm not good at abstraction and symbolism and textual analysis. I just love a good story too much. Calvino starts several good stories in this book but the trouble is he doesn't finish them, and the through-line was much too symbolic for me. I think it has a lot to do with stories and how we make them a part of ourselves, and how often the stories we find aren't what we first expected, and so on and so forth. Way above my head in a lot of ways, like I said.

In fact I'm somewhat hard-pressed now to figure out what else to write about this book.

I felt distant from all of the characters, in both the "novels" and in the framing story. I wasn't that caught up in the action of the framing story, which sees The Reader meeting an Other Reader, a woman named Ludmilla, who maybe the Reader falls in love with except I was just straight up confused by the end of the book.

I think that this is a book for which I'm doomed to like the idea better than the execution.

Has anyone out there read Calvino's other work? Should I give him another try?

* A note on my spelling of the title of this book: "traveller" is on the cover of my edition, and then abruptly switches to "traveler" in the text. I've retained the Canadian spelling in this review, for better or worse.

** Sadly, the entire text of this essay is now behind a paywall, which it wasn't when I first found it several years ago. Brain Pickings offers a summary of its main points, however pale it may be in comparison to the full text. I may or may not have saved a pdf just in case of this circumstance that could be shared with interested parties.

They have known her since she was a girl, they know everything there is to know about her, some of them may have been involved with her, now water under the bridge, over and done with; in other words, there is a veil of other images that settles on her image and blurs it, a weight of memories that keep me from seeing her as a person seen for the first time, other people's memories suspended like smoke under the lamps.

And yet the sight of the books in Ludmilla's house proves reassuring for you. Reading is solitude. To you Ludmilla appears protected by the valves of the open book like an oyster in its shell. The shadow of another man, probable, indeed certain, is if not erased, thrust off to one side. One reads alone, even in another's presence. But what, then, are you looking for here? Would you like to penetrate her shell, insinuating yourself among the pages of the books she is reading? Or does the relationship between one Reader and the Other Reader remain that of two separate shells, which can communicate only through partial confrontations of two exclusive experiences?

If one wanted to depict the whole thing graphically, every episode, with its climax, would require a three-dimensional model, perhaps four-dimensional, or, rather, no model: every experience is unrepeatable. What makes lovemaking and reading resemble each other most is that within both of them times and spaces open, different from measurable time and space.

Email ThisBlogThis!Share to TwitterShare to FacebookShare to Pinterest
Labels: : Classics Club, : Random, Author: Calvino (Italo), Title: If on a winter's night a traveller