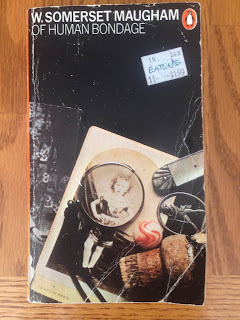 Review:
Of Human Bondage was not at all what I expected it to be, and I didn't even expect the BDSM fantasy that the title would suggest. In fact I didn't really expect anything from this book. The back cover reveals a lot of what happens: the main character, Philip Carey, is orphaned and relatively poor compared to the protagonists of most other English novels*, spends a bunch of time dicking around on the Continent, and then goes to London to study medicine, the profession of the father that he never knew. We stay in his head most of the time, except for a few brief forays into the minds of others (it's not terribly clear, though, whether those forays are based on Philip's feelings and observations or the other characters'). I realized though that doctors don't seem to appear in fiction all that often, or at least not on The List. We just had Will Kennicott in Main Street, of course, but I can't think of any others besides him. And the doctor stuff in this book is honestly minimal. So I don't even know what point I'm trying to make. Doctors do too much actual work to make good protagonists in your average weepy literary novel?

I suppose Of Human Bondage could be called a coming of age novel, but I'm not sure I'd exactly say that about it. It's in the vein of something like Angle of Repose, where the story covers the first third or so of the protagonist's life in depth. Angle of Repose gives us an ending, though, which this book doesn't. We have no way of knowing what happens to Philip after the end of this novel. He may live happily ever after or he may grow bitter and unhappy, it's really hard to know which of those things ends up happening. He has a ton of misadventures with women, which aren't as objectionable as one might expect, and damn if this isn't also one of the first books on The List to even begin to allude to the exhaustion of the life of the working woman circa the turn of the last century. I think everyone else has had servants, except Lily Bart toward the end of The House of Mirth and even then she wasn't cooking and cleaning for nine children and a husband, she just had to work for a living.

According to Maugham, this book is heavily autobiographical, and there's a lot of realism to it, perhaps because of that. There's at least one character who shows up at random inconvenient intervals, and others who just drift away, never to be seen again. This is true to life in my experience, as opposed to the tiny casts of most novels. Shout out as well to the fact that Philip is another example of the very rare disabled protagonist: he has a club foot. Knowing that the book was autobiographical, I actually read up on Maugham a bit because I was curious whether he suffered from this as well. It turns out that no, he "only" stammered (and was gay!), but the dude seems to have had a pretty intriguing life himself, even without fictionalizing it.

I'm rambling and all over the place with this review, but I basically just want to say that I really enjoyed this book. It's worked its way inside my brain because of its frankness. I could relate to Philip, the shy bookworm who doesn't know what to do with his life, a lot. The brief glimpse of poverty in London really struck me, and speaking of that, I think that this book really deals with money in a way that I haven't encountered before except maybe with A Tree Grows in Brooklyn. Basically, it was willing to put dollar values on things, and let you know just how close to the edge Philip is at any given time.

The truest sign that there was something special going on here, though: part of the dicking around Philip does is to study art in Paris for a while. I often can't really be bothered to look up art works or other novels that I see mentioned in books, but in this case the descriptions were so compelling that I actually did. It was great.

So yeah. Read it!

Insensibly he formed the most delightful habit in the world, the habit of reading: he did not know that thus he was providing himself with a refuge from all the distress of life; he did not know either that he was creating for himself an unreal world which would make the real world of every day a source of bitter disappointment.

The local doctor had suggested that many gentlemen now went in for engineering, but Mrs Carey opposed the idea at once.
'I shouldn't like Philip to go into trade,' she said.

'There is nothing so degrading as the constant anxiety about one's means of livelihood. I have nothing but contempt for the people who despise money. They are hypocrites or fools. Money is like a sixth sense without which you cannot make a complete use of the other five. ...'

'... Death is unimportant. The fear of it should never influence a single action of the wise man. I know that I shall die struggling for breath, and I know that I shall be horribly afraid. I know that I shall not be able to keep myself from regretting bitterly the life that has brought me to such a pass; but I disown that regret. I now, weak, old, diseased, poor, dying, hold still my soul in my hands, and I regret nothing.'