39. Go Tell It On the Mountain by James Baldwin

Year Published: 1953
Pages: 263
First Sentence: Everyone had always said that John would be a preacher when he grew up, just like his father.
Rating: 1/3 (don't bother) 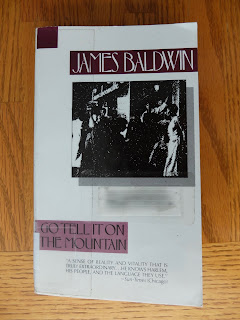 Review:
Go Tell It On the Mountain marks the first time in my life that I've ever picked up on gay subtext in a book before it was explicitly pointed out to me, which I'm going to take as a sign that I'm getting better at this sort of thing. On the other hand, the book's content completely baffled me otherwise, so I'm not sure that's actually the case.

James Baldwin's first novel is a semi-autobiographical story about a black boy named John, growing up in Harlem in the 1930s. The bulk of the book takes place in church, as well as in reminiscences from John's aunt, stepfather, and mother. His stepfather is an abusive hypocrite, his mother is trapped in a marriage with him because she didn't want her bastard son to grow up without a father. John is a very smart, sensitive boy, who has feelings about other boys and also struggles with religion and his feelings about his family. The book is mostly just a snapshot of John's life, occurring prior to his conversion experience.

Following so close on the heels of The Heart of Matter, I couldn't help comparing John's religious experience in this book—I'm not sure exactly which flavour of Christianity this is, maybe Southern Baptist—with my own experience of Catholicism, and let me tell you, the contrast is sharp. Aside from some of the wilder mystics, Catholicism is about 95% stodgy ceremony and ritualism. The religion John and his family are practising in this book is ecstatic and free-flowing. John is waiting for a conversion experience to be "saved," whereas Catholics are baptized soon after birth.

Baldwin is tremendously good at getting into his characters' heads: each of them has a clear point of view. That's part of how I got so lost. There's no clear perspective on any of this, and I like it when books tell me what their opinions are, even if I'm not about to agree with those opinions. Thanks to skimming Baldwin's Wikipedia page, I think part of this problem comes from the fact that Baldwin himself was quite ambivalent on the topic of religion and whether it's a force for good or evil in the world, and in the lives of black Americans especially.

There are some really affecting passages in this book, especially those dealing with black men's experiences with racism in both the North and South. However, there are also copious amounts of bible stuff and religious imagery, and that got tedious, so it resulted in a lower rating.

Her eyes told him that she thought he was a fool; but that, even had she loved him ever so desperately, it would have been beneath her to argue about his decision—a large part of her simplicity consisted in determining not to want what she could not have with ease.