40. The Heart of the Matter by Graham Greene

Year Published: 1948
Pages: 255
First Sentence: Wilson sat on the balcony of the Bedford Hotel with his bald pink knees thrust against the ironwork.
Rating: 2/3 (meh) 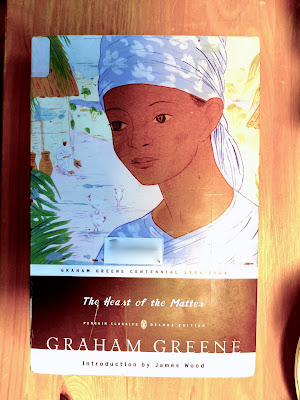 The Heart of the Matter is all about Catholic Guilt, and thus should be right up my alley. Catholic guilt is one of those things that I will never stop finding fascinating and I'm always interested in narratives about people's struggles with faith. However, it's only in the last year or two that I've really begun to recognize how much of an impact Vatican II had on Catholicism and how my experience of the religion (baptized and confirmed Roman Catholic) is very different from the experience of those who belonged to it prior to the Second Vatican Council.

Blah blah blah. All this to say that I'm lukewarm on Graham Greene's novel. There are, I think, three main reasons why, which I suppose I shouldn't get into until I've described a bit of the plot.

Major Henry Scobie is a British police officer living in some coastal African colony during the Second World War. He doesn't get a promotion, his wife is a pile of misery, he's a solid, honest man, and also he is Catholic to the max. Said pile of misery is named Louise. She likes to read books, her child is dead, and Louise wants to go to South Africa for whatever reason. There are money problems, and in order to send Louise to South Africa, Scobie ends up borrowing money from a man named Yusef, who is an organized crime boss of sorts. Basically moments after Louise has departed on a boat to South Africa, Scobie starts up an affair with a young woman named Helen Rolt. Guilt ensues.

Here are my problems with this book:

First of all, colonial narratives are almost always a hard sell for me. The way locals are described is often uncomfortable, and this book is no different. E.g. "His bare feet flapped like empty gloves across the floor." I simply do not have the energy or the education to parse the way bodies of various characters from various communities are treated in this book. And I am just not interested in hearing about how horrible the heat and the bugs are for British colonists in Africa.

And speaking of that, I also was not terribly enamoured of any of the characters in this novel. They're not bad or unlikeable, but they seldom jump off the page. Scobie was mostly just boring.

Which brings me to my third, and most important, point: the adultery in this book is so perfunctory. I'm pretty sure that's exactly what Greene was going for, looking at the mundane futility of sin and guilt and the ultimate mercy of God. It's more realistic to examine this sort of thing in the light of a bland love affair and blander marriage, rather than some grand romance. But while realism is fine, I guess, I'd prefer a little more actual entertainment.

And I guess that's really all I have to say. I like my Catholic guilt to pack a bigger punch in some indefinable way. The plotting of the story is very tight and I enjoyed that aspect of the book. Greene does well in conveying the utter environmental misery of his setting, but again, that's just not something that interests me, for whatever reason.

If I could just arrange for her happiness first, he thought, and in the confusing night he forgot for the while what experience had taught him—that no human being can really understand another, and no one can arrange another's happiness.

In our hearts there is a ruthless dictator, ready to contemplate the misery of a thousand strangers if it will ensure the happiness of the few we love.