First Sentence: An excerpt from an interview with Dr. Valentine Pillman by a correspondent from Harmont Radio, after the former received the 19— Nobel Prize in Physics. 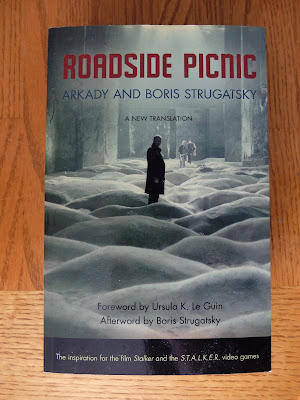 In retrospect, it was probably foolish of me to hope that Roadside Picnic would be The Brothers Karamazov plus aliens, but such is the reputation of Russian literature that I couldn't help myself.  I haven't read a ton of Russians (yet) but I've read enough of them to have established some expectations about what a Russian novel will be like.  Here's how Arkady and Boris Strugatsky measured up to those expectations.

The premise of this novel is amazing.  A few years after an alien "visit," there are several Zones scattered across the Earth.  These Zones are areas the aliens occupied, and they have been rendered extremely dangerous for humans.  However, they contain various alien refuse that is highly valuable and toxic (e.g. perpetual batteries).  Young men called stalkers sneak into the Zone and remove this material, selling it on the black market.  Red Schuhart is our main character, and he lives in a town somewhere in North America that was nondescript until aliens landed right beside it.  He is a stalker, and he's good at it.  The story is told in about four long chunks at different points over the course of about ten years of Red's life.  At the beginning, he's twenty or so, just out of jail (stalking is illegal) and working for the Zone research institute.  By the end, he's 31 but the brutalities of his life make him seem much older.

Roadside Picnic has all the bleakness and brutality you might expect from a Russian novel, but unfortunately none of the exhaustive detail.  A discussion between two characters on the subject of intelligence lasts only a few pages in this novel, whereas it could've easily gone on for ten.  And I wanted more about the Zone.  Honestly the novel is stronger without a whole bunch of detail about what exactly happened during the Visit, and what exactly the Zone is like, how big it is, etc.  That's a delicate balancing act, but for me personally the balance could've gone toward a little more detail.

The cast of characters is small, and pretty light on female characters of course.  Red's girlfriend and eventual wife, Guta, is a little too perfect for comfort, but generally I thought the characters were well-developed.  I like that Red is smart and driven but still fallible.  My expectation for heavy prose wasn't met at all, but that's ok.  As much as I love dirgey Russian novels, the reason I haven't read many of them is because it's hard to pick up a new one when you know the weight of the prose can be felt all the way down through your hand.  The language is zippy and colloquial, and apparently this book introduced the word "stalker" into Russian (pronounced "stullker").  I wasn't really looking, but I didn't detect any stylistic seams between the two brothers, either.  I would love to learn more about how the two of them wrote their books together.

Finally, since I'm feeling a shadow of Communist Russia hovering over this review, I will say that Roadside Picnic is basically apolitical.  There's vague talk of a military-industrial complex, and the stalkers are all surveilled, but there's pretty much nothing here that suggests the authors' conditions were anything out of the ordinary.  Until, of course, one reads the Afterword from Boris Strugatsky, relating their troubles getting the novel published (this is in my copy of the book, which has a fresh translation of the text as well).

Definitely pick this up if you like alien invasion stories.  It's set in 19?? so it doesn't feel dated at all beyond knowing that aliens didn't briefly show up on Earth and then abruptly leave sometime in the mid 70s.

"[...] But I have to warn you, Richard, that your question falls under the umbrella of a pseudoscience called xenology. Xenology is an unnatural mixture of science fiction and formal logic. At its core is a flawed assumption—that an alien race would be psychologically human."
"Why flawed?" asked Noonan.
"Because biologists have already been burned attempting to apply human psychology to animals. Earth animals, I note."