CANADA150: The Morning After by Chantal Hébert with Jean Lapierre

On October 30, 1995, the Canada that celebrated its 150th birthday this year almost ceased to exist. That was the night of the 1995 Quebec referendum on the question of whether Quebec should separate from Canada (YES) or remain in the federation (NO). The result was a shockingly close 49.42% YES to 50.58% NO. 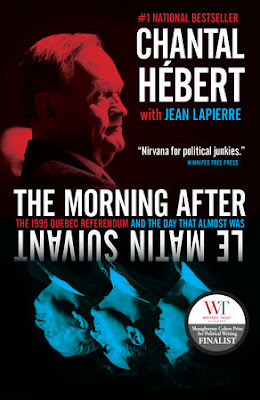 In The Morning After: The 1995 Quebec Referendum and the day that almost was, Chantal Hébert and Jean Lapierre interview several key figures on both sides of the issue, not focussing so much on what actually happened as what might have been if the results were reversed. I had a great time reading the book. With so many moving parts and disparate opinions, it's impossible to write an alternate history of the referendum, and that's clear from the start, but getting a glimpse into what these people were thinking about and planning was really interesting and, in some cases, kind of funny.

I was vaguely familiar with Hébert's work prior to reading this, but Jean Lapierre is someone I knew absolutely nothing about. It turns out that he was a founding member of the Bloc Quebecois, Canada's baffling federal separatist party. The Bloc was, even more bafflingly, the Official Opposition in the House of Commons at the time of the referendum.

I wish I had the time to devote to really digging in to the Two Solitudes and all that fun stuff, but unfortunately this quick summary will have to suffice.

First, though, you should know that when the referendum happened, I was the ripe old age of nine. I was also a regular viewer of farmervision, which is to say that my family had four television channels: CBC, CTV, STV, and Radio-Canada (en français). This led to my watching a lot of CBC's two political satire shows, Royal Canadian Air Farce and This Hour Has 22 Minutes, and as a result I was more informed on the subject of federal politics at the age of nine than I've ever been since.

Reading this book was a fun opportunity to learn a bit about the politicians that are tremendously familiar to me as caricatures. If you watched the embedded video above, you'll already be familiar with Air Farce's take on Lucien Bouchard and how he might have reacted to a YES vote, but here's the list of everyone who appears in the book, and some brief thoughts if I happen to have any.

Next up: Her Daughter the Engineer by Richard I. Bourgeois-Doyle (This is the book I currently have out from the library, and may, to my dismay, end up being the last non-fiction book I have time to read this year. I'm very much looking forward to it, though, and the fact that I've had to put it off because I took so long writing this review is yet another source of dismay.)
Posted by M.R. at 10/26/2017 12:00:00 AM