First Sentence: The night before he went to London, Richard Mayhew was not enjoying himself. 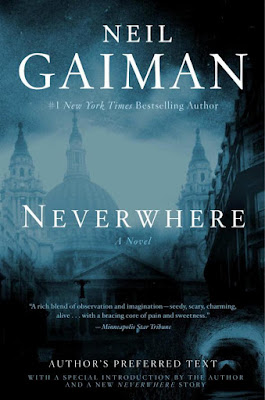 Because of how keenly I've felt the weight of this project lately, I'm resorting to including any 20th century books that my book club reads under the Random heading. This isn't something I'm particularly eager to do, but it does bring the end of the project into view just that little bit quicker. Also I feel a little bad for reviewing another Neil Gaiman book when I've committed to reading and reviewing more books by women, but I'll have to live with that, too.

As I understand it, Neverwhere began life as a television show, and evolved to the point where it ended up in my hands in an "Author's Preferred Text" version, something I wouldn't typically condone, but which Gaiman does a very good job of justifying in his introduction to the text. That being said, I haven't experienced any of the other versions of this work, including the television show or radio play.

Richard Mayhew is a young man who moves to London and finds himself gainfully employed and engaged to a very Type A woman named Jessica. Or at least that's where he is when a young woman named Door stumbles across his path, drenched in someone else's blood. In the process of helping Door, Richard's engagement is broken off, and seemingly all of his ties are broken as well. After interacting with Door, no one can see Richard anymore except other denizens of London Below. Richard becomes determined to help Door and find someone who can help him get back to his life in London Above.

I had an amazingly hard time reading this book, and I'm not exactly sure why. I think it had a lot to do with external factors, but that doesn't really change the fact that I never made it a priority to pick up this book and read it. Of Gaiman's other solo efforts, I've only read American Gods, and that was soon after it was released, so I really don't remember my experience of reading that, although I do have a feeling I loved it less than many others seem to. Neil Gaiman's novels maybe just don't click with me, or perhaps it's the urban fantasy genre that's the problem.

I had a poor sense of who all of the characters were, anyway, as far as "arcs" were concerned. They're by no means bad, and neither is the book, and I enjoyed it and even loved some parts. But I felt like Richard maybe had too much in common with Gaiman, and that Door's magical eyes were more fanficcy than interesting. I didn't love the two villains, Mr Croup and Mr Vandemar, as much as I suspect I was supposed to.

So this is certainly something I'd recommend to urban fantasy lovers, but something about it just really didn't click with me. Hopefully you'll have better luck.