(Have I really not posted a review since July?! I AM VERY SORRY, YOU GUYS. -M.R.)

Year Published: 1818
Pages: 240
First Sentence: Sir Walter Elliot, of Kellynch Hall, in Somersetshire, was a man who, for his own amusement, never took up any book but the Baronetage; there he found occupation for an idle hour, and consolation in a distressed one; there his faculties were roused into admiration and respect, by contemplating the limited remnant of the earliest patents; there any unwelcome sensations, arising from domestic affairs, changed naturally into pity and contempt. 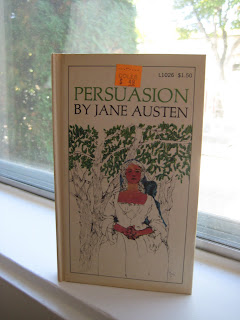 Review:
This may come as a bit of a shock, but I’ve never read a Jane Austen novel before this one. In fact, I’ve somehow managed to pretty much completely avoid all of her work and the numerous film adaptations of it. I like my 19th century female authors Brontë-flavoured, basically, and until I can find out for myself whether Frankenstein lives up to its hype, things are going to stay that way.

So, that means that while I have the vaguest possible notion of what happens in Pride and Prejudice, I went into Persuasion almost completely blind about Jane Austen and the kinds of books that she wrote, her style, and so on.

The story is about Anne Elliot, a quiet sort of young woman (about 25 years old), sole sane member of a family of fools (her anomalous, much-beloved mother is something like ten years dead at the opening of the novel). Her entire family is portrayed hilariously, if somewhat one-dimensionally, as being generally vain and concerned with their status and wealth. However, at the beginning of the novel, the family is somewhat hurting for said wealth due to Anne’s father’s expensive lifestyle, and so they end up having to rent out their house. The house is rented by an admiral and his wife, who happens to be the sister of the young Captain Frederick Wentworth, a past suitor of Anne’s.

Thus, after a separation of something like eight years, Anne and Captain Wentworth come together again for the first time, and LOL AWKWARD it’s left to Anne to navigate the situation with her typical poise and quiet charms. Will her feminine wiles attract Captain Wentworth a second time? Because p.s. she totally still has the hots for him after all these years. I think the answer is obvious, although Austen does throw a bit of a curve ball over the course of a few chapters, in the form of Anne’s cousin William Elliot, who is the heir to her father’s title and very interested in Anne.

The book was good and the heroine somewhat atypical (in that she was pretty much completely conventional, not at all rebellious or stubborn or anything like that), but I found it extremely short and rushed. There was a lot more room to ratchet up the tension, and the book suffers from not taking advantage of that. But I ended up checking Wikipedia before writing this review to make sure that this book (published after Austen died) was a legit novel of hers and not one of these “lost” novels that are in horrible draft form but get published regardless, and it turns out that the reason the book is so short is that Austen was literally hurrying to finish it before she died.

So that makes things just a little more macabre.

One thing that I really find interesting is how a novel like this one is completely opposite from a modern romnov in terms of the sex content. And actually, I think that both suffer because of it.

There is tension and “heat” in Persuasion, but there’s also an underlying stuffiness that really threw me off. The novel basically culminates in this conversation that Anne and Wentworth have over the course of a stroll through some park in Bath, where they talk to each other about their “characters.” As far as I’m concerned, “character” isn’t even really a thing anymore, and I know that the book is a product of its time, but the whole conversation just crushes any previous subtext about these two basically just wanting to tear each other’s clothes off.

On the other hand, the modern romnov immediately pours on the sex and never really stops, and that’s really distracting, as well. In fact in many cases it seems like everything that isn’t sex is just a struggle to convey some sort of normalcy to the situations described.

Tangents about doin’ it aside, I’ll definitely be reading more Austen in the future. No matter how much I love the Brontës, I’ll be the first to admit that they don’t really have a sense of humour, whereas Austen does, and I’m interested to see what its powers are when not (possibly) somewhat dimmed by impending death.

Quotations:
Mr. Shepherd was eloquent on the subject, pointing out all the circumstances of the admiral's family, which made him peculiarly desirable as a tenant. He was a married man, and without children; the very state to be wished for. A house was never taken good care of, Mr. Shepherd observed, without a lady: he did not know, whether furniture might not be in danger of suffering as much where there was no lady, as where there were many children. A lady, without a family, was the very best preserver of furniture in the world.

"--Well, Miss Elliot" (lowering his voice), "as I was saying, we shall never agree I suppose upon this point. No man and woman would, probably. But let me observe that all histories are against you, all stories, prose and verse. If I had such a memory as Benwick, I could bring you fifty quotations in a moment on my side the argument, and I do not think I ever opened a book in my life which had not something to say upon woman's inconstancy. Songs and proverbs all talk of woman's fickleness. But perhaps you will say, these were all written by men."
"Perhaps I shall.--Yes, yes, if you please, no reference to example in books. Men have had every advantage of us in telling their own story. Education has been theirs in so much higher a degree; the pen has been in their hands. I will not allow books to prove anything."