R83. They Both Die at the End by Adam Silvera

As usual with romnovs, I'm spoiling the ending of this one. -M.R.

Pairing: two teenage boys who are about to die
First Sentence: Death-Cast is calling with the warning of a lifetime—I'm going to die today.
Climax: I kiss the guy who brought me to life on the day we're going to die. 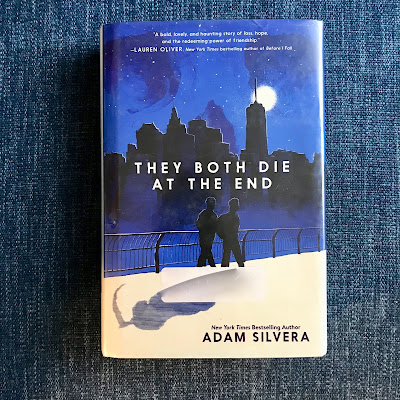 Review:
I'm not sure anyone remembers this but me, but a while ago I committed to maintain the percentage of books I reviewed officially as 33% written by women, 67% written by men for the combined Top 100 and Random/Romance books. As I come closer to the end of the project, I'm running out of slots for male authors on the Random/Romance half (due to their overwhelming majority on The List), and thus I almost didn't review this book.

Until I kicked myself, because duh, They Both Die at the End is a romance novel, and that's part of why we're here.

I can't say that romantic tragedy is one of the genres I typically go for, so reading this was a unique experience. Adam Silvera's novel is about a parallel universe to ours in which, through some mysterious mechanism, the Powers That Be are able to notify people that they will die sometime during a certain day. Our heroes are Mateo Torrez, age 18, and Rufus Emeterio, age almost 18.

Mateo is about to start online college courses and is terrified of and obsessed with dying. His mother died giving birth to him and he was raised by his father, who is in a coma at the beginning of the book. He's pretty awkward and shy and not prone to putting himself out there, but he has one very good friend named Lidia. No one knows he's gay.

I could never quite figure out whether Rufus was still a high school student or not, but the beginning of the book finds him beating up his ex-girlfriend's new boyfriend. The ex, a girl named Aimee, is someone he met in his foster care home, which is fortunately not a total hell hole. A few months before the events of the novel, Rufus watched his parents and sister drown after getting their own Death-Cast announcement phone calls. He's a generally good kid, friendly, athletic, and artistic, but he's obviously been going through a lot. He is openly bisexual.

It feels weird to announce their sexualities like that but here we are.

Due to circumstances, Rufus and Mateo both find themselves using the Last Friend app, a service to match people up with company on their last days on earth. They meet up, and end up spending the day together.

I'm not going to go into this a great deal when it comes to individual activities and plot points of the book, because it's pretty meandering. What I'm sure you can figure out on your own is that over the course of a highly emotionally charged day, Rufus and Mateo fall in love.

And then, as the title makes clear, They Both Die at the End.

So I actually started out really enjoying this novel. I found both Mateo and Rufus to be well-developed, engaging characters who had real chemistry together. I was on the edge of my seat wondering when Mateo, too closeted to even reveal his sexuality in his Last Friend profile, would finally make some sort of move.

And then he does make a move and the whole book loses momentum when it happens.

This is partly because as soon as the two boys kiss for the first time, the characters get very sappy. They're both first-person narrators, and there's just a lot of superlatives flying around in both their internal monologues and their dialogue with each other. I kinda forgive this because they're teens, but it really sucked the wind right out of my sails. Plus, I was very startled by the fact that we get almost nothing out of Mateo when it comes to the fact that he's finally expressing his sexuality.

Before I finish, I need to get a bit nitpicky about Death-Cast and the worldbuilding in this book. It's kept intentionally vague, and that's fine, but there were some logical flaws with the system that I just couldn't get past. The book says that the calls come between midnight and 3 am on the End Day. I don't get how this makes sense. A lot of people wouldn't even receive the alert because they were driving home drunk from a party at 1:30 am and didn't get the call till 2:25 am when they'd already crashed into a tree. There is no logical reason why any death detecting technology that could detect someone's death up to 23 hours, 59 minutes, and 59 seconds away would be limited to a calendar date. Therefore, this is either the result of Death-Cast messing with people (i.e. they know people's Death Days farther in advance than they let on) or just the author doing this for the sake of convenience. But oh well. Other than that I think Silvera did a good job worldbuilding, showing industries and pop culture that might spring up in response to this kind of innovation.

The themes of this book are solid if perhaps on the nose. Be brave and size the day. These are stated and restated and then repeated a few times more for good measure. I have issues with the "living as if you'll die tomorrow" platitude that gets thrown around because unfortunately that is not a sensible thing to say or do under the thumb of capitalism. I don't actually think that's what this book is saying, though. It's more about taking reasonable chances with your life, the kind that won't result in your death but could result in your happiness.

I'm considering trying out some of the author's other work. This book is written in first-person present tense for obvious reasons but I'm not sure if that has ever worked for me, and if he can hook me most of the way with an uphill battle like that, I imagine I might find things to enjoy in his other work. So, we'll see.
Posted by M.R. at 5/25/2020 12:00:00 AM

Email ThisBlogThis!Share to TwitterShare to FacebookShare to Pinterest
Labels: : Romance, Author: Silvera (Adam), Title: They Both Die at the End