My apologies for the lateness of this post, everyone. Apparently I had it stuck in draft form instead of scheduled to publish as it should have yesterday. Enjoy, and I look forward to getting your recommendations! - M.R.


I've seen a few things in the last year talking about the gender breakdown of book reviews, and the latest one has inspired me to look into how I'm doing.

Of course part of this project is completely out of my hands when it comes to the genders of the authors, and I'm fairly certain that The List has come under some fire already for its lack of books by women. The other part will, I hope, be more balanced, thanks to my initial forays into the romance genre. But I'm afraid that I almost certainly choose more books by men when the choice is up to me, and that's something that I'm going to have to work on.

But instead of speculating, let's look at what the numbers are. Here are some pie charts for you (with the usual caveat that I am not a graphic artist of any kind whatsoever...). 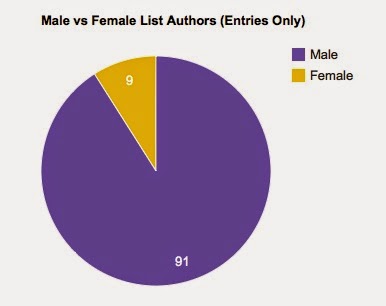 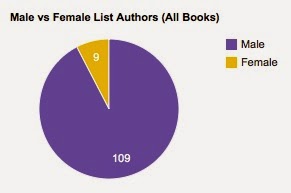 The bad news is that, holy shit, The List doesn't even have ten books by female authors on it. Only nine. All but two of them are "crowded" into the lower 50 books, meaning that I've read many of them already, and I think that that's why I perceived the percentage being ever so slightly higher. Like, I would've expected the total number to be somewhere around 15. Of course, that's still unbelievably low, but it's better. It gets even worse when you look at the actual total number of books (a perpetual annoyance of mine). There are 18 additional books on The List* because the board are a bunch of jerks who insisted on including two trilogies, a quartet, and a series of 12 books, none of which were written by women, by the way. I think what I'm saying here is that this is just about the least perfect list around. 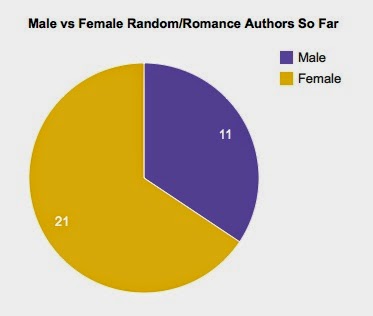 The good news is that thanks to the romnovs, I'm doing rather better than The List. I can't say for sure how things would have broken down if I hadn't decided to look into this right now, or if I hadn't started off reviewing romnovs before switching to whatever I felt like, because a lot of the random books lately have been written by men. Mea culpa. 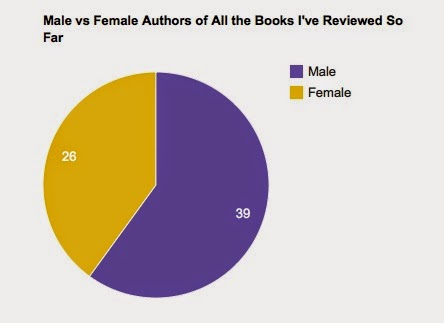 As for how things add up overall here on the blog, there's nothing like a 50/50 split. Men dominate in the overall reviews so far, and will continue to dominate unless every single random/romance novel I review from now on is written by a woman. While this isn't impossible, it's not something that I'm willing to do. As you've seen, even though I'm enjoying more and more of the List books as I climb through it, it's still a bit of a chore for me to not be able to just read whatever I feel like reading all the time. That's how I read all through high school, every summer during university (I barely read at all during the school year), and throughout my university internship. That's how I'll read again ten years** or so from now when I finally finish this project. But I'm still going to commit to maintaining the proportion of my reviews of books written by women to at least one third. That means 37 of the next 68 random/romance reviews (or just under 55%) will have to be books by women. That hardly seems like a hardship.

That being said, please recommend some books written by women within the 20th century! I have three reviews coming up already (Shirley Jackson's The Haunting of Hill House, Colleen McCullough's The Thorn Birds, and Gabrielle Roy's The Tin Flute), and some authors to check out (Margaret Atwood, A. S. Byatt, Doris Lessing), but I'm very much open to suggestions.

And what about you? If you review books, how many of them are written by women vs men? If you're "just" a reader, how do your choices stack up when it comes to the gender of the writer?

* Actually I just discovered there is another quartet/tetralogy, Parade's End, which I failed to take into account here, but am too lazy to include in my graphs. It's also written by a dude, though, so just imagine that slice of pie occupied by the nine lady books being even smaller (9 to 121).
** I did the math on this recently. Ten years seems to be the most reasonable timeline at this point. I'll be done in 2020 if I read one List book every four weeks until then, and we all know what a likely scenario that is.
Posted by M.R. at 7/16/2014 12:00:00 PM

Email ThisBlogThis!Share to TwitterShare to FacebookShare to Pinterest
Labels: : In Which...