Well, after being really conservative with my 2019 reading plans, I'm getting bold with the plan for 2020, which is to say that this year I plan to finish reading the Top 100. I don't love announcing that because it feels like a dare to the universe to get in the way of this plan, but I also don't want to beat around the bush anymore. I have ten books from The List left to read. I can do this.

Before we get into my plans, take a look at last year's list (minus the Top 100 books I had included). As usual, items that I read or discarded are struck out.

For 2020, I have the usual mixture of List books and also books that are on my unread bookshelf. I'll be including six spots for book club books on my so-called "TBR Bingo" again, plus the following 32 books. Two of these won't fit on the bingo card, so I've omitted the two books that I think I'm least likely to actually get to this year, as I race to the finish line of The List.

I'll put these in alphabetical order again. New additions are bold as usual, and I've underlined the Top 100.

As for the rest, here they are in alphabetical order by title, because I love to just keep arbitrarily mixing this list up: 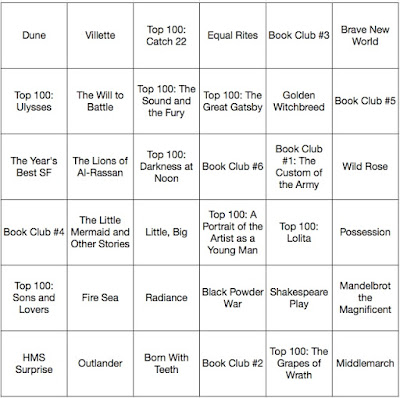 Wish me luck and let me know what your reading plans are for the year!