Saskatchewan is A Thing: Hotel

Once again, it's been a while since I posted a Saskatchereference. It may have something to do with the fact that this particular one is a bit tenuous.

Last year I reviewed Hotel by Arthur Hailey. While it was reasonably entertaining, it did end up on the chopping block when I did my latest "weeding" of my permanent book collection. That is, until I remembered that Saskatchewan shows up in this novel.

The book is set at a fancy hotel in New Orleans, Louisiana, and one of the characters is a thief. At the beginning of the book, he steals a car that is plain-looking except for its green and white Michigan license plates. These plates are noticed late in the novel, leading to the following exchange:


"Has there been an arrest?"
The detective shook his head. "Wasn't discovered till hours after it happened. There is a lead, though. A neighbor saw a car. Couldn't remember anything, except it had license plates that were green and white. Five states use plates with those colors—Michigan, Idaho, Nebraska, Vermont, Washington—and Saskatchewan in Canada."

Emphasis mine, of course. 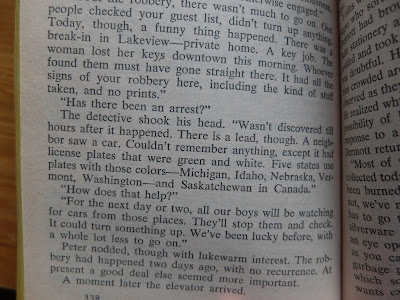 I call this a "tenuous" Saskatchereference because it's not as gratuitous as a typical one. "Saskatchewan" isn't invoked as a funny or exotic place, but simply because the fact is that the license plates in Saskatchewan were green and white. They're still green and white at present, actually.

In fact, the most interesting thing about this to me is that Hotel was published in 1965, during an era in which Saskatchewan license plates were exchanged each year for new plates with a different appearance. Two years prior, in 1963, the plates were blue on orange. Two years later, in 1967, they were purple on yellow. Here's a graphic from WorldLicensePlates.com which has an error or two but conveys the gist of what I'm saying.


I appreciate Arthur Hailey's commitment to exhaustive detail and commend him for getting this particular one right.