Pairing: Illusionist and accountant, but they're both also magic users
First Sentence: The circus arrives without warning.
Climax: The entire room trembles as they come together. 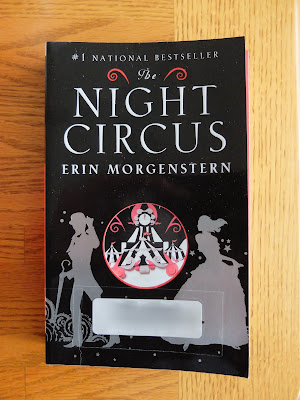 Calling The Night Circus a romance is a bit tenuous, I must admit. The book is more about its setting than it is about any of its characters, and as such, the relationship between the two magicians who create the circus feels like an afterthought. No matter, though! I'll take any excuse to add to the number of romnovs I've reviewed.

Le Cirque des Rêves is a circus with a monochrome colour scheme (21st century branding in the 19th century!) that travels randomly around the world, opening at night and just generally being wonderful and mysterious. It is the site of a competition between two young people, Celia and Marco, who were trained in different "schools" of magic. Celia's teacher is her father, who is cold and abusive and a showoff, Marco's teacher is a man in a grey suit, who is cold and abusive and secretive. Celia and Marco spend over a decade adding magical things to the circus, trying to figure out the terms of their contest. That's sort of it.

I really enjoyed this book, but it had a bit of a style over substance problem. It took me over a hundred pages to notice that it was written in the present tense, for example, because I was busy having a great time reading about the origin of the circus. The point I noticed was about the point where the origin story ends and things shifted into the more plotty section of the book. Usually I'll notice present tense right away, because I hate it most of the time. I could practically taste the caramel corn, though, and that's not something to just brush off. Erin Morgenstern is masterful in describing her setting.

There are certain things in the novel and actions that the characters take that feel very unrealistic, though. For example, Marco is raised in almost total isolation, which would make him a total wreck as a person. But because the book takes place in a heightened reality I won't fault it for lack of realism. What I do fault it for is what I mentioned at the beginning of the review: there isn't enough attention paid to the relationships in the book. Over the course of five hundred pages, I'm not sure that Celia and Marco spend even fifty of them together in the same room. They talk about how they are surrounded with each others' presence at the circus and so they've fallen in love, but that's not enough for me, the reader, to really see any connection between them. Other characters who are instrumental to the plot are simply dropped at the end with no follow up. There are just these blanks scattered throughout that make this a decent book rather than a great one.

I would go to Walt Disney's Cirque des Rêves theme park in a heartbeat (having been to Disneyland, and given that Disney owns everything you love, I feel confident they could pull it off). I'll even see the movie that may or may not be coming. But I'm not sure if the content of this book will prove to be all that memorable.