First Sentence: If he had had his way, Peter McDermott thought, he would have fired the chief house detective long ago. 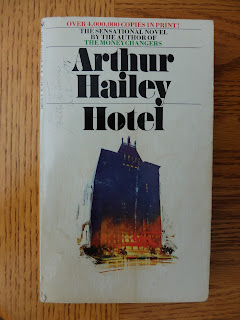 Review:
Strangely enough, this book is exactly what it says on the tin. It's about five days in the life of a hotel in New Orleans. The hotel is a large independent one, and the picture painted by this book is surprisingly fascinating.

The novel is structured as a succession of days featuring a number of subplots including various hotel guests and staff. These subplots include: a hotel thief on the make fresh out of jail, a potential hostile takeover of the hotel, a couple of romances, and the fallout of a hit and run. The characters are all surprisingly vibrant* and well-rounded, the functions of the hotel are gone over in great detail that never feels strained, and there's a surprising depth—or maybe just a nice bit of lip service to the issue of desegregation. But…

Published in 1965, the book is of course out of date in a large number of its details (the elevators have operators in them) which is not a problem at all, except for one pretty glaring thing. Marsha Preyscott, approximately 19 years old, is very nearly gang raped at a hotel party hosted by a frat. I doubt that situation is dated, sadly, but what is dated is the way Arthur Hailey writes the aftermath, which is that Marsha brushes off the whole thing with astonishing ease and proceeds to latch on to the main hero, Peter McDermott, as if absolutely nothing traumatic has happened to her.

So that being said, I'd have preferred if Hailey could have handled that a little bit better or found some other way for Peter and Marsha to encounter one another that had nothing to do with rape. Hailey is like so many other authors here in his race but not sex consciousness. It's even more disappointing considering that another female character in the book has a tragic backstory involving her whole family being killed that isn't paired with her having been raped as well (an inseparable combo for all time, if fantasy novels can be believed).

Still, despite certain predictable beats, and the whole gang rape thing (um), I quite enjoyed this book. Hailey is listed on Wikipedia as being "British Canadian" for reasons I can't quite decipher, and his greatest claim to enduring fame as far as I'm concerned is that he wrote the book that inspired the movie that inspired Airplane! (do yourself a favour and read this plot summary, you will not regret it). Nevertheless, a bunch of his books, including this one I think**, were huge bestsellers, and he obviously knew what he was doing. Even if it wasn't great literature, it was a fun book to read.

* I keep saying "surprisingly" because this would seem to be (and is) a rote thriller about a hotel, and I suppose I'm just really astonished at the quality of it.

** This book also inspired a tv series of the same name.