Year Published: 1969 (of course)
Pages: 274
First Sentence: She was so deeply imbedded in my consciousness that for the first year of school I seem to have believed that each of my teachers was my mother in disguise.
Rating: 1/3 (don't bother) 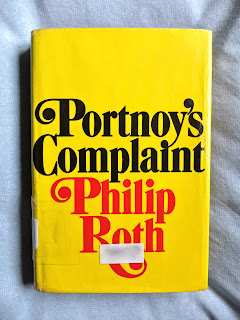 Well, in case you can't tell from the title, which is apt, this book was a stupid waste of time.  Philip Roth does everything he can to turn readers into anti-Semites, which is a terrible thing to say but also, I think, true.

Alex Portnoy hates his mother.  He has sexual hangups because of his mother. He is a brilliant man, or so we're told, but his achievements are as nothing in the face of his search for a shikse wife.  Or something.  The book is told as if Alex Portnoy is reclining on the couch of his therapist, a Dr. Spielvogel.  The doctor doesn't speak until the end of the book, and it's explicitly called out within the text as a punchline.  So the whole thing is literally just Portnoy complaining about his lot in life, and the complaints are dumb and I was never convinced why I should care.  If the point was to express futility or something, I suppose it succeeds, but it wasn't useful or enlightening.

As far as inspiring anti-Semitism, that's an exaggeration of course.  What I mean is that this feels like a book that's trying to prove every Jewish stereotype in existence, via Portnoy.  I suppose I gained a bit of insight into the Jewish-American psyche/experience, but that didn't feel particularly illuminating.

Honestly I haven't felt as if a book was such a waste of my time in a long while.  Just so self-indulgent and pointless.  It's definitely not that the writing is bad, or anything is, like, objectionable.  It's just dumb.  The big thing that people may know about this book is that it's really dirty, which I haven't even commented on because that's, like, pointless too.  I can't tell if it's a frank discussion of male sexuality or if it's an exaggeration that's meant to shock the reader, but it feels pretty tame in the era of Fifty Shades of Grey and, more positively, The Boss.

Not much else to say really.  I may post one of the quotations I copied from the book separately with a rant in the near future, but we'll see.

Seriously though do not bother with this book, it has almost nothing to offer.

Then came adolescence—half of my waking life spent locked behind the bathroom door, firing my wad down the toilet bowl, or into the soiled clothes in the laundry hamper, or splat, up against the medicine-chest mirror, before which I stood in my dropped drawers so I could see how it looked coming out. Or else I was doubled over my flying fist, eyes pressed closed but mouth wide open, to take that sticky sauce of buttermilk and Clorox on my own tongue and teeth—though not infrequently, in my blindness and ecstasy, I got it all in the pompadour, like a blast of Wildroot Cream Oil. Through a world of matted handkerchiefs and crumpled Kleenex and stained pajamas, I moved my raw and swollen penis, perpetually in dread that my loathsomeness would be discovered by someone stealing upon me just as I was in the frenzy of dropping my load.