Can I also just quickly mention that "lonesome" is one of the most gorgeous words in the English language? -M.R.

First Sentence: When Augustus came out on the porch the blue pigs were eating a rattlesnake—not a very big one. 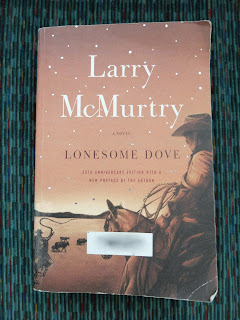 Review:
I didn't even realize that I was doing this, but I guess I've slowly been working my way through the books that inspired the various great miniseries of the 80s, none of which I've actually seen. Shogun only got a blurb, but The Thorn Birds got the full review treatment. We'll see what I get to next. The one I read most recently was Lonesome Dove by Larry McMurtry. I enjoyed this more along the lines of Shogun than The Thorn Birds, and in fact I think I liked it better than Shogun.

The book follows the journey of a pair of ex-Texas Rangers driving a huge herd of cattle from Texas (well, Mexico, really, where they stole the cattle), to Montana. This is a gross oversimplification, because it seems like the two of them are rarely together in most of the book, and there's a whole lot more than that going on. The book is full of pretty much everything that you want from the Old West: skulls and sunrises on empty prairies, coming of age, Irish immigrants singing to cows, horses with personality, sudden violence, beautiful prostitutes with big dreams, and the kind of hard people that are increasingly rare or extinct in North America, willing to sleep on the ground for weeks and skip bathing, too. With respect to that last, while it's not something that I want for myself, it's something that I can admire nevertheless.

You may have noticed something missing from my list above, because I wanted to try to get into it more than just as part of a list. I also need to add the usual caveat that I am not an expert, and also white, and therefore could be way off track. I think you can probably see where I'm going with this now, which is the whole "Cowboys and Indians" aspect of the story. I'm not going to delve too deeply into this, because the more I say, the greater chance that I'll make a fool of myself. Anyway.

Being that I'm a Canadian citizen and, again, a white person, I have a vested interest in decolonization not being a thing. At the same time, I've been learning and thinking more over the last few years about just what happened in North America at the time of white settlement. This includes many specific things, good and bad, but at least one of those things was a genocide that no one seems to be willing to acknowledge (try explaining residential schools to a German woman who just attended Remembrance Day services in Ottawa and see how you feel about Canadian history after that).

Right from the beginning, we learn that Gus and Call (the central pair, where Gus is the jovial blabbermouth and Call is the taciturn, dignified one) have basically given up rangering in the wake of the subjugation of the Comanche and control of the American border with Mexico. My knowledge of Texas history and the Comanche is almost non-existent, but a quick look at Wikipedia suggests that the Comanche were quite warlike and formidable around this time, although it's still not clear to me whether the Comanche that Gus and Call fought with and killed were actively murdering people or just existing. The point, I suppose, being that from a modern perspective, these people were defending their territory, and it was European settlers who were in the wrong. This has proven to be very hard for white North Americans to swallow, though. I guess we just haven't managed to muster the cultural courage it would take to admit that, even though this was something that happened before any number of more recent morally repugnant events (or was it?), it was still extremely wrong. In short: Cowboys vs Indians is pretty much engraved in our cultural mythology at this point, although I think that we're finally starting to acknowledge the issues with that.

A lot of Old West narratives manage to skirt this thorny issue by simply ignoring it and focusing on the settler characters (see: Angle of Repose). Lonesome Dove doesn't quite do that, because the "Indians" are mentioned pretty frequently although seldom depicted in any detail. What really got all of this from the back of my mind to the front of it was an incident that happens halfway through the book. A young prostitute named Lorena ends up semi-accompanying the cattle drive, although her camp is away from the main one, and one night she gets kidnapped by a man named Blue Duck. He's the only native person in the book who gets any characterization, and that basically amounts to evil (there are white and black people that are also depicted as being just bad people, but for them it's contrasted with people who are brave and/or good, rather than faceless masses, though certainly not all of the natives are shown to be cutthroat menaces). Blue Duck takes Lorena and "sells" her to a group of Kiowa and a couple of buffalo hunters (white ones), who do about what you'd expect.

To be clear, I didn't exactly find this episode objectionable, it was just what really got me thinking about what I was reading. Is reading a book where the cowboys are the heroes anything like reading a book where SS officers following orders are the heroes? Or is it more like Roman soldiers are the heroes, people at sufficient remove and with such superior firepower that we can't help marvelling at what they accomplished, and forget the death and misery? Obviously many of the people who came to live in North America were not bad people, to the point that some of them could probably be considered refugees. But that doesn't give anyone the right to ignore what then ended up happening to the people who already lived here. Human history is full of conquest and if everyone had just stayed put after settling various parts of the world, things today would be very different. So do we or don't we need to bring an understanding of this to any or all of our narratives? Ultimately I don't think that I've really come to any specific understanding about all this, which in itself might be a symptom of my privileged perspective. As usual, I welcome any additional input.

The book has some ambiguity in its perspective, too, that I'd be remiss to not point out. This could be considered lip service, but at least one character talks about how the land that they're on belonged to others before, and that those others had a right to defend it. It's critical of Manifest Destiny and how pointless and deadly that idea was, in a way that was subtle enough that I literally didn't realize it until someone else pointed it out. (See, for related reasons: Gone with the Wind, another book with a questionable stance on its period of history, which I didn't think to mention when I reviewed it.)

After saying all that, though, I have to admit that I liked this book a lot. Did I say that already? I loved so many of the characters, and the way their relationships were portrayed. I've honestly been pretty indifferent toward cowboys for a long time, but McMurtry was very effective in his descriptions of their work, where something like twelve men can get thousands of cattle to walk thousands of miles. Women were rare in this landscape, but there were a surprising number of good female characters in the book at least. McMurtry even cowrote the script of Brokeback Mountain, so although I don't know anything about his personal politics, I would guess that he's one of the more progressive of the various Old West aficionados.

The book is a bit of a monster (hence this monstrous review), but doesn't feel overlong, and there isn't a lot of filler in it as far as I'm concerned. The bulk of it deals with the cattle drive, with some diversions. It's basically just a slice of things, leaving a few loose ends, in a good way. And yet, I'm not sure that I'll read anything else from the tetralogy that this book begins. I enjoyed this sampling of the Western genre, but if it's going to give me gigantic crises of conscience, I think it's unlikely that I'll be abandoning sf as my preferred go-to genre anytime soon.

TL;DR? I liked it but it made me think pretty hard about some things. That's never a bad thing, though.

"It's alright, though," Augustus said. "It's mostly bones we're riding over, anyway. Why, think of all the buffalo that have died on these plains. Buffalo and other critters too. And the Indians have been here forever; their bones are down there in the earth. I'm told that over in the Old Country you can't dig six feet without uncovering skulls and leg bones and such. People have been living there since the beginning, and their bones have kinda filled up the ground. But it's just fellow creatures, it's nothing to shy from."