Pairing: Farm girl and Catholic priest
First Sentence: On December 8th, 1915, Meggie Cleary had her fourth birthday.
Climax: The world achieved its ultimate contraction, turned in upon itself, and totally disappeared. 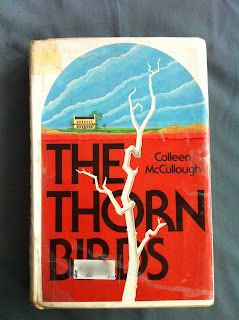 Review:
Unfortunately I don't have a super reliable source for the claims I'm about to make, so you'll have to trust my anecdotal evidence and some baby name website where I found the graph below. The Thorn Birds was published in 1977, and soon became a miniseries that aired in 1983, starring Rachel Ward and Richard Chamberlain as the two leads. The name Meg[h]an[n], which had hitherto languished in obscurity, experienced a spectacular surge in popularity*. 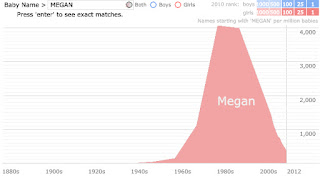 My name is Megan, and it's because of this book/miniseries.  After running across a box set of the miniseries VHS tapes, I've finally gotten around to investigating this weird phenomenon that apparently captured the hearts and minds of young women in the 80s and then was forgotten about by the culture at large.

I had to start with the book, and to save you reading any further, I will tell you that it isn't very good, and I'm pretty confused about why ladies were so enamoured of it, and the character Meggie, at the time. The key may be in the miniseries.

(If Wikipedia is to be believed, the name Megan is a diminutive of a diminutive—Meg/Meggie—of Margaret, but so help you God if you ever call me Meggie. It is terrible. Maybe one of the reasons I wasn't a big fan of the heroine of this book.)

The book is one of those generation-spanning things, and feels very similar to Gone with the Wind in narrative style if not in quality. The Cleary family (Paddy, Fiona, a bunch of indistinct sons, and lone daughter Meggie) is eking out a living in New Zealand, when Paddy's sister Mary invites him to come and learn how to run her enormous sheep station in the Australian Outback. Meggie is something like ten years old at the time, and this is when she meets Father Ralph de Bricassart, who is immediately, shall we say, absorbed by her. This is, yes, super creepy to read about in the early 21st century, and I didn't like this plot any more when I encountered it in Memoirs of Geisha, which has nothing to do with priests.

As Meggie, a beautiful little girl, matures into a beautiful woman, Ralph has to come to terms with the fact that he loves her as a woman, and Meggie loves him back. Fortunately for Ralph, rich aunt Mary dies and leaves him her entire fortune to manage, which allows him to rocket into increasingly high ranks of the Catholic Church, and get away from Meggie before he breaks his vows, although they kiss a couple of times.

Meggie spends a whole bunch of time pining for him, and eventually marries Luke O'Neil, who looks a bit like Ralph, but is basically a greedy insensitive asshole. There's one really uncomfortable scene where Meggie, who has somehow been shielded completely from sex despite her farm upbringing, is basically raped by her husband after a crazy long train ride to their new home somewhere in the north of Australia. Meggie goes to work as a domestic servant while Luke heads out to cut sugar cane. Because it's the first half of the 20th century, he gets all of her property when they're married, and all he wants is a giant pile of money to sit on, so he doesn't spend any of it on the house and family that Meggie so desperately wants from him.

She finally tricks him into getting her pregnant, so that she will have a baby to love at least (I am really not being sarcastic here, by the way, this is how it's presented in the book), but the pregnancy is miserable and the labour is worse. Lucky for everyone, Ralph senses that Meggie is going to need him, and travels from Rome or Sydney or wherever the hell he is at this point in the book to be at her side.

The baby that results is the book's strangest character, Justine, who apparently hates everyone because her parents didn't love each other when she was conceived or something (at least that's the subtext). Another couple of years go by, and Meggie is increasingly miserable, to the point that her way-too-kind boss lady sends her away on a vacation to some island retreat. Ralph happens along not much later, and boss lady sends him to meet Meggie, and they bone a ton of times and it's amazing and they love each other and blah blah blah. Meggie returns home, positive she's pregnant and that the baby will be a boy. She goes to find Luke, who has been away for weeks or months, has sex with him to hide the fact that her son is going to be a bastard, and then leaves him to go back to her family on Drogheda. The boy, Dane, is born easily and is a golden child who everybody loves.

The book goes on forever after this, with Ralph breaking his vows a couple more times, and ends by punishing Meggie for trying to put one over on God: Dane dies young. Justine finds love with a man who was once a young German soldier that Ralph helped during World War II, in the book's actual interesting love story (if not for Justine's completely absurd characterization, that is).

I'll return very quickly to comparing this book with Gone with the Wind before really delving further into the very strange things going on in The Thorn Birds itself. The main point of similarity is the way that characters in the two books use children as vessels for their unrequited love: Rhett loves "Bonnie Blue" in place of Scarlett, while Meggie does the same with Dane. Both children die young. The Thorn Birds spans a much longer period than Gone with the Wind, and doesn't have the same richness of detail (accuracy of that detail notwithstanding), but does feel similar.

But regarding the strangeness...

The themes in The Thorn Birds are bizarre.

Basically there is a dichotomy set up between men as ambitious dickwads and women as suffering nurturers. Obviously there's a historical context for the whole men vs. women thing, and I have seen this type of dichotomy before, but that doesn't mean I have to like it, and the addition of a religious aspect makes it even stranger in this book. There's a sense that women are in combat with God and basically being toyed with by Him. Meggie, for example, is very angry with Ralph at one point for choosing his vows and vocation over a life with her, and Dane's death is treated as God's vengeance for her efforts at trying to get a piece of Ralph for her own.

Like I said, it's not that I haven't seen this women vs men, or even this women apart from God thing before, but in this book it was really striking for some reason. In fact that might just be it: the book is bashing the reader over the head with this stuff, and pushing its viewpoint too hard. There's no subtlety to it.

So anyway. I think I've written more about this book than any of the others so far, so I'm going to wrap up this review: it's not terrible, but it's not really good, either. On the subject of Meggie as a character who could inspire women to name their daughters after her, I don't see it at all. Her strongest action in the whole book is leaving Luke. Otherwise she just sort of hangs around and stuff happens to her. So yay, that's my namesake!

Eventually I will probably watch the miniseries, and hope that that clears things up a bit more.

* I submit that the exact same thing happened with the book/movie The Notebook (published 1996, movie released 2004) and the name Noah, but I have no more than anecdotal and baby name website proof of that, either. 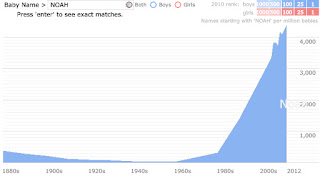 But Fee shook her head. "No. Whyever I did what I did, pride hardly entered into it. That's the purpose of old age, Meggie. To give us a breathing space before we die, in which to see why we did what we did."