Once again I've made it nearly halfway through the year before posting my 2016 reading goals. However, to be honest, this year's goal is the same as last year's: read my own books that I haven't read yet. I'll be crossing off the books that I listed last year but have since read, and adding new ones. This time the order is sorta random. I've got 13 books to go, in comparison with last year's 31, and given my actual efforts to get through this list lately, I'm pretty confident that I'll manage it. 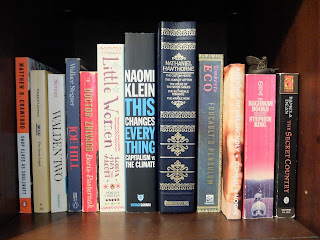 The other books on the shelf are new ones that I've acquired since the beginning of the year and am not including in this year's reading plans, although I'd like to read Rage as my annual Stephen King summer book.
Posted by M.R. at 5/23/2016 12:00:00 AM