What I'm Reading: Beyond Heaving Bosoms by Sarah Wendell and Candy Tan

As with A Natural History of the Romance Novel, I came to this book via a Goodreads comment about Tania Modleski's Loving with a Vengeance. Get ready for some raving this time, though. 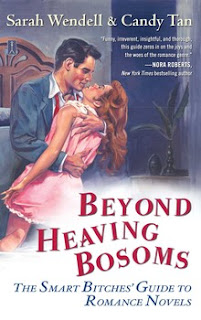 If I'm not mistaken, Sarah Wendell and Candy Tan are the co-founders of the blog Smart Bitches, Trashy Books (Tan doesn't seem to be around there anymore), which I don't really have the time or desire to read, because despite my interest in the genre, I'm not a fan and thus definitely not a part of the community. Anyway, this book is Wendell and Tan's snarky love letter to the romance genre, written by fans for... hard to say. I think other fans, but I found the book really funny and enlightening and I've been known to be a bit of a hater. Also, it's accessible in a way that Loving with a Vengeance and A Natural History of the Romance Novel really aren't.

The authors lampoon the "Old Skool" clichés of the genre with a lot of wit, and also deal with some of its seedier aspects (rape, in particular, which apparently was a mainstay for many years) with intelligence and aplomb. I learned a lot about romance and people who like it from this book. Basically: it's just a different kind of fantasy. Who would've thought!? (i.e. this should have been obvious all along, but here we are.) There are some cute sections at the end including romance novel Mad Libs and Choose-Your-Own-Adventure.

My one quibble is that sometimes the jokey aspects of the book got a bit out of hand. The word "come" was footnoted with the word "literally," like, five times too many for my liking. Other than that, though, I highly recommend this to anyone who's curious about the genre, and probably people who like it, too.