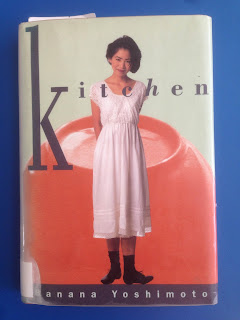 Not gonna lie, one of the main reasons why I wanted to get to Banana Yoshimoto's Kitchen first today is that I needed to finally read something for my Year of Reading Women. I'm semi-certain that this is the first time I've read a prose book by a Japanese woman, having read at least three by Japanese men, and I must say it's already a good illustration of the value of reading women writers. Battle Royale is a cartoon (a great one), Shusaku Endo's Silence is spectacular but ultimately nothing to do with women, and whatever Haruki Murakami is up to isn't really concerned with women's experiences on their own.

I know just enough about Japan that I'm uncomfortable making any broad statements about it or trying to discuss the culture there in an informed way, either. Kitchen is a wonderful window into mid-80s Japan, though, without being too explicit about its setting. It's not really a novel, but a novella, bound up with a short story called "Moonlight Shadow." I liked the novella better, finding it more interesting than the story's magical realism. Both works are ultimately about loneliness, love, and living after loss. Yoshimoto seems to be intrigued by men in women's clothes in both, as well. A young man wears his dead lover's school uniform. A transwoman works at a gay bar, with what might be drag queens or other transwomen. The portrayal here is thirty years old and probably not perfect.

Anyway, I've had cause to feel alone lately and this book helped.

The traffic signal changed, and the river of light formed by the cars continued on its way. The signal shone brightly, suspended in the darkness. Hitoshi had died here. A feeling of solemnity slowly came over me. In places where a loved one has died, time stops for eternity. If I stand on the very spot, one says to oneself, like a prayer, might I feel the pain he felt? They say that on a visit to an old castle or whatever, the history of the place, the presence of people who walked there many years ago, can be felt in the body. Before, when I heard things like that, I would think, what are they talking about? But I felt I understood it now.